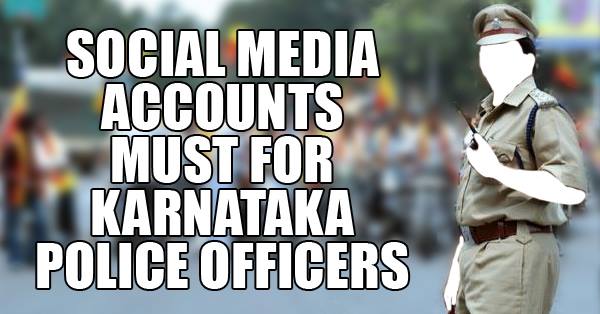 With the Increasing potential of Social Media Networking the Govt.of Karnataka has taken very Useful & Innovative step for the Citizens Of the State.Karnataka Government has made it mandatory For The Top Level Police Officers to Have Facebook , Whatsapp & Twitter Accounts so that people can approach them easily.

Additional Director General of Police (ADGP) ALOK MOHAN Recently Conducted an Official Meeting directing all Commissioners & Superintendents of police to open their Facebook & Whatsapp Accounts as part of the government’s renewed vision to transform police into a citizen-friendly and responsive force.

ALOK MOHAN said the use of such latest softwares and applications will help people of their state reach the authorities easily.He also said this will help police chiefs in districts to keep local communities informed of the initiatives and actions taken by the state government for them.

Police said the government wants to get tough against wrong use of social media after the recent communal riots and incidents of moral policing, including in the aftermath of the murder of scholar MM Kalburgi. “Many used the social media to Plan & Welcome the murder. Now The police chiefs can monitor these activities on social media through their accounts.It will enable the community mentors to report it before any damage is damage is done – said a senior officer .

“The government is of the view that social media is becoming a ‘ Dreadful weapon ‘ and needs to be Kept checked under the eye of Cyber crime Experts and Cyber Law Enforcement Department of the Country.

Govt’s New Policy Will Make Deleting Your WhatsApp Messages A Crime
The Typist From UP, Gets A Threat Call For Getting “Cop Suspended”