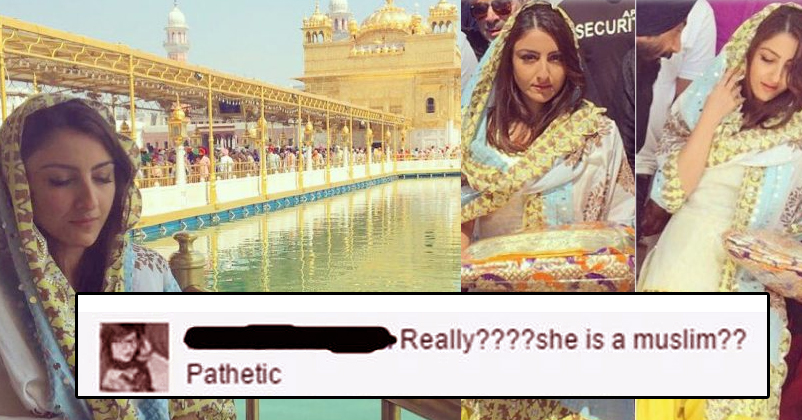 The Pataudi Princess, Soha Ali Khan was recently targeted on social media by some rude people. She was thrashed with unethical comments for visiting the Golden temple and Ganpati Pandal. Few of the attackers questioned her faith after her visit to the temple. But, the fiery actress was not in a mood of taking any of the shit and fired back “Going To Temple Doesn’t Make Me Non-Muslim.” She visited the temple to seek blessings for her upcoming thriller film 31st October. The matter turned worse when some trolled her with abusive and insensitive comments about her marital life and gender.

She says,
“I am all for freedom of expression, but being told how going to a temple makes me a non-Muslim is plain callous. No one has the right to say that. Whether I choose to do namaz or go to a Church, how does it affect anyone?”

What do you think? Just visiting temple, church or other shrine and seeking blessings of other deities make one UNFAITHFUL???

Do let us know your views on the same by commenting in the comments section below.

Height Of Embarrassment For This Boy! Girl Pulls Off His Pants In Public & Has Fun
This Beautiful Canadian Town Gives You A Job And Land For Anyone Willing To Relocate Here!