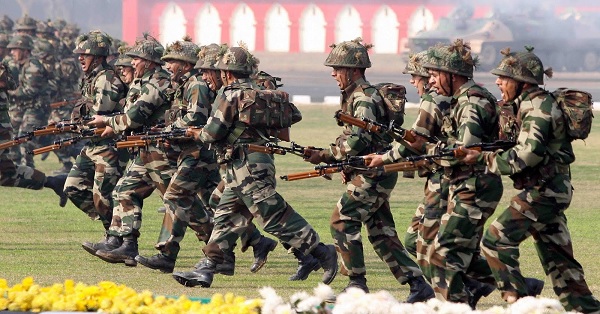 We all live safely in our home only because there is Indian Army protecting us 24×7. The Indian Army Consists of he Indian Air Force, the Indian Navy and the Indian Coast Guard.
We all must have heard some of the brave incidents of Indian Army.

Have a look at these amazing facts that will make you feel proud of our Indian Army.

1. Indian Army is the third biggest military contingent in the World next to USA and China.

2. India controls the highest battlefield in the world, the Siachen glacier, at 5000 metres above Mean Sea Level (MSL). 3. India has the biggest “volunteer” army in the world. 4. Indian soldiers are considered among the very best in high altitude and mountain warfare. 5. Unlike other government organisations and institutions in India, there are no provisions for reservations based on caste or religion. 6. Operation Rahat (2013) was one of the biggest civilian rescue operations ever carried out in the world. 8. India has one of the biggest contributors to the UN in Peace Keeping Forces’ missions. 9. AGNI-VI (under development) will have a range of 10000 kms., which would give India the power to strike any part of the world barring South America and very limited regions of North America.

10. No fauji (armed forces) mess, anywhere, for jawans (soldiers) or officers will ever serve you non-vegetarian food on Tuesdays and Thursdays, as a mark of respect to Lord Hanuman and Pir baba, respectively. 11. We have an elite force. For example to become a Royal marine, one can simply volunteer for the service and undergo training. But with Indian army, one has to go regular training which lasts atleast 49 weeks and then undergo a commando course training before the age of 30. 12. Most of us having seen hollywood movies and american documentaries believe that only americans can keep their military actions a secret. However the worlds best kept secret report is the so-called Brooks Bhagat report hidden in the book shelves in Delhi. 13. Celebrities like Abhinav Bhindra, MS Dhoni, Kapil Dev, Nana Patekar, Mohanlal, and others have been awarded honorary ranks as part of the territorial army. Continue Reading
You may also like...
Related Topics:Indian Army