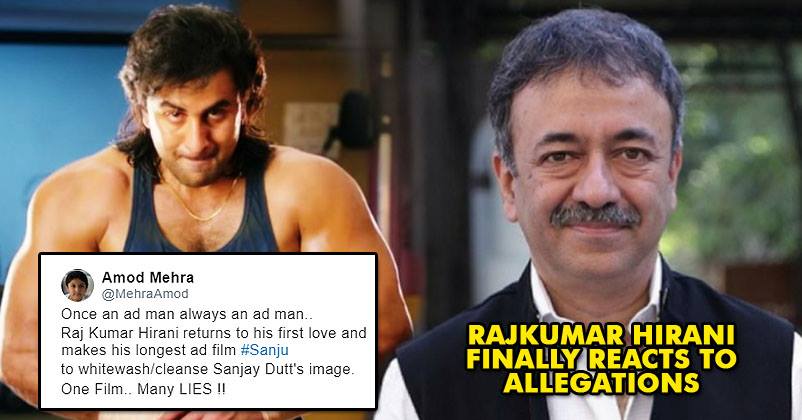 Rajkumar Hirani’s “Sanju” which is based on the life story of Bollywood actor Sanjay Dutt and features Ranbir Kapoor in the titular role has been a blockbuster and has broken many records on the box-office. There is no denying the fact that fans and critics have praised the movie for brilliant direction and powerful performances on the part of almost all the actors, especially Ranbir Kapoor.

Nevertheless, there are some people who have alleged that “Sanju” is an attempt to whitewash the image of Sanjay Dutt and bash media. “Sanju” has been co-written by Abhijat Joshi and when he was asked about it, he said that they have not bashed media at all and on the contrary, they are actually media’s great fans. As per him, they have bashed a particular section that sensationalises things to make it look spicy with a question mark. He also expresses his sense of utter amazement at the fact that no one has paid a heed to that or admitted that it actually happens. This all was done with reference to a piece of news that read, “RDX in a truck parked in Dutt house?”

The makers have a problem with this kind of journalism as Rajkumar Hirani said that if anyone would believe that there was RDX in the house of Sanjay Dutt, it would be because of that particular piece of news and that’s what has been criticised in the flick. Some people are saying that the entire movie is related to bashing media and once again it’s making headlines.

Everything from the drug addition of Sanju to his love relationships, imprisonment for possessing arms to emotional bond with wife Manyata, friend Kamli and parents has been shown clearly in the film. Hirani is not able to understand as to why people are using the term whitewash. As per him, Sanju kept the gun and they showed it; he is also shown serving 5-yr jail term and accepting that it was his mistake. If all the things are shown, where and what did the makers try to whitewash?

Subsequently, Abhijat Joshi also said that they have shown a graphical representation of the crime like Sanju destroys the gun, throws the bullets, etc.

Hirani added that the term whitewash is being used by people and he actually wants to know for what thing as he doesn’t think that he tried to do it in any manner. He has clearly shown that Sanju had 308 girlfriends, he slept with Kamli’s girlfriend and he was highly addicted to drugs. He further asked whether it is called whitewashing and what crime Sanju committed, adding that if he had to whitewash him, he would have shown him as Mahatma Gandhi.

On the question of glorification of Sanjay Dutt, he said that showing a man consuming drugs, keeping a gun, sleeping with his best friend’s girlfriend, etc. is not glorification.

Abhijat Joshi also asked people whether they think that Hirani would give 3 precious years of his career which is on the peak on whitewashing someone’s image.

Is Bigg Boss Fame Priyank Sharma In Legal Trouble? Finally Priyank Breaks His Silence
10 Patriotic Movies That You Should Watch This Independence Day