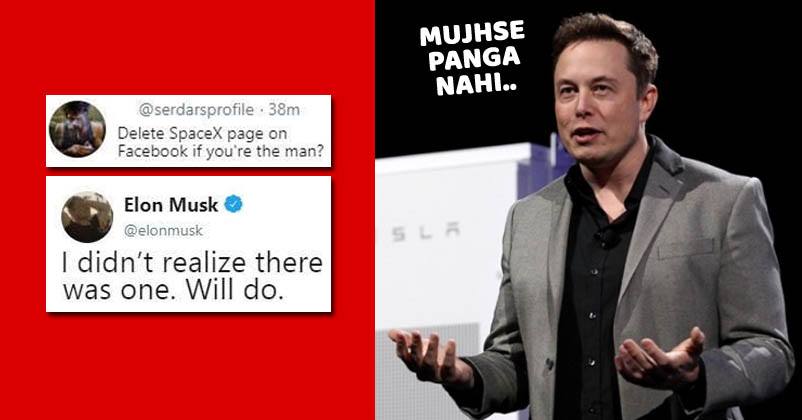 There have been protests against Facebook after there were headlines about Facebook data not being secured. Data of around 50 million users was taken by political firm Cambridge Analytica, which was indeed risky.

Even Musk joined this movement and deleted his SpaceX and Tesla facebook pages, when challenged by a Twitter user.

Well, it all started on Friday, when Elon Musk tweeted, “What’s Facebook”. He had seen a wide range of users saying so, which is why even he tweeted.

It is time. #deletefacebook

The moment Musk tweeted, a user challenged him to delete his SpaceX Facebook page. Here’s that challenge.

Delete SpaceX page on Facebook if you're the man?

Elon Musk is that man; he said that he doesn’t realize he has a Facebook page. He immediately deleted it.

I didn’t realize there was one. Will do.

Then, another user challenged him to take down the Tesla page too.

this should be deleted too right? pic.twitter.com/1llNaXS0CC

And guess what, Musk did that too easily!

Both the pages had more than 5 million followers. God knows how Elon Musk deleted them in just few minutes. It is very surprising, isn’t it?

However, if you still want to check out updates by the company, you can do so by visiting its Instagram and Twitter handles. We must say “Elon is the man”.

Major Twist In Shami-Hasin Controversy. Shami Gave It Back To Hasin With The Biggest Proof
Top 10 Bikes In India Below 1 Lac