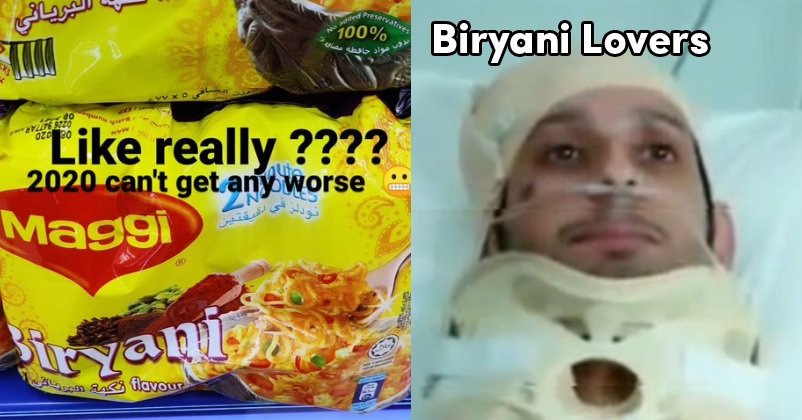 Maggi is one of those food items which everyone must have eaten once in the life and over the years, it has made huge number of faithful and loyal customers who don’t even think of trying any other noodle other than Maggi. Such consumers are also very passionate about the original taste and flavor of Maggi and any change in its taste is not acceptable to them.

However, we have seen that many experimental foodies have come up with some weird dishes such as sweet milk Maggi, orange Maggi or having Maggi with paani-puri, etc. This has certainly spoiled the mood of many people but now we are going to tell you something which will make you believe that even the manufacturing company used some weird ideas in order to increase their sales.

Recently, a Twitter user made a post in which he posted the photo of a packet of Maggi which was biryani flavored. 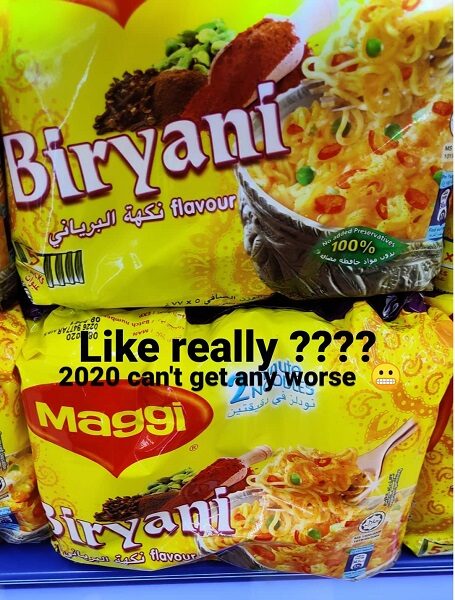 Biryani is one of the most popular dishes of the world and this time, it is not just the Maggi lovers who got hurt but the biryani lovers also didn’t like the idea.

2020 bring it on .. pandemic after pandemic pic.twitter.com/hjvUwHkzYc

Though we have come to know about it now, the biryani flavored Maggi is pretty common in UAE and many other countries of the Middle East.

However, Twitter users were very shocked and expressed their emotions over this experimentation with their loving Maggi. Here are some selected tweets:

plz no, it tastes bland and spicy(I have eaten it y'day)

Da heck is that 😅

Feeling u get when you see someone eating masala dosa with paneer curry instead of traditional aloo curry and chutney🙄 https://t.co/t52MBuQvXx

There has been a Biryani flavored ice cream on offering at one of the Ohri's chain Hyderabad for years. The Maggi pales in comparison.

WTF on earth is this now?

I only have one question:

While Maggi lovers are feeling sad and cheated, the biryani lovers must be pondering as to what the need of using noodles instead of rice was. By the way, what is your opinion about biryani Maggi?