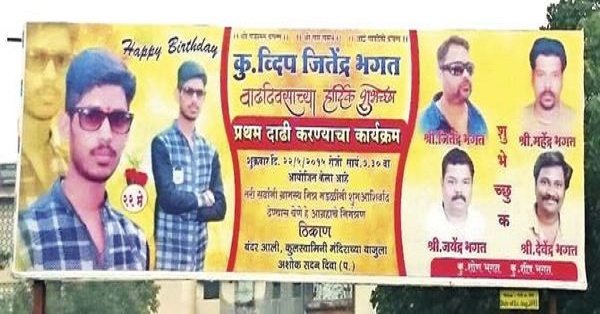 News comes from Thane where an out of the ordinary event took place. An imposing reception was hosted by a Diva family for the son who turned 17 a week ago and his light growth of hair was shaved off lavishly.

Here we are talking of Dweep Bhagat who just stepped in the phase of maturity and to celebrate it, his father, Jitendra Bhagat who deals in real estate, threw a luxurious bash. It does not at all appear to be shocking now that they called a barber for the auspicious occasion of shaving off Dweep’s hair growth before over 250 guests.

In the words of Jitendra, “I chose Dweep’s birthday and publicly got his beard and moustache shaved.”

Further, he said, “Since eight years, I wanted to conduct a unique ceremony for Dweep. The planning started two months ago. I did not share the plans with anyone as I didn’t want anyone to steal the idea. I got a giant banner put up outside Diva station and distributed invitation cards.”

To quote what Dweep has to say in this connection, “I felt like a king as people thronged the hall and waited for me to come up on stage. I was very excited as the hair-dresser shaved the moustache and beard.” When asked this splendid celebration’s cost, Dweep’s father maintained, “Cost was not important. What was important was the joy while bringing up the child and giving him a royal treatment on his birthday.”

Sunny Leone Says, “Improper To Haunt Me With The Past”
IIT-Madras Puts Ban On Student Group For Criticizing Narendra Modi