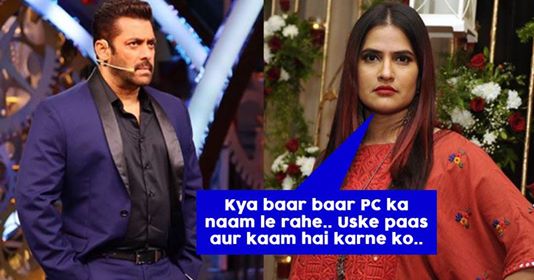 Salman Khan’s movie Bhaarat is all set to release on June 5th. Bhaarat will be starring Katrina Kaif too but she was not the first choice. Apparently, Priyanka Chopra was set to star in the movie but due to her marriage ceremony, she had to cancel the movie. But it seems Bhai can’t handle this rejection and is constantly demeaning PC for it.

Salman Khan went out and said.” Bhai went on to say, “And she, over Bharat, did choose the USA in the ‘nick’ of time. She has worked so hard all her life, okay? And when she got the biggest film of her life, she dumped that film and got married. You know, hats off! Usually, people leave their husbands for a film like this.”

While Priyanka is holding her head high and not responding to this hatred, singer Sona Mohapatra has her take on this and posted.

Cus @priyankachopra has better things to do in life, real men to hang out with & more importantly, girls to inspire with her journey. 🤟🏾🔴

A showcase & poster child of toxic masculinity. Low brow dig at not only a woman who was not in the room but a disgusting disregard & contempt for the woman & colleague sitting next to him in the same room. Unless we call out such serial bad behaviour, nothing changes, #India .🔴 https://t.co/NuEmOWQl12

Trying telling that to his fans who shadow his toxicity & are calling her derogatory names on my timeline. They meme her 10 year age gap with her husband but conveniently forget that their idol is close to 20 years older than her. Grow up, you fools, I say to them.🙏🏾🔴 https://t.co/M9sthpUQd1

Mumbai Police Is Here With Another Innovative Message For The Public
You Won’t Believe She Is An MP From Bengal, Here Are Top 10 Stunning Pictures Of Her