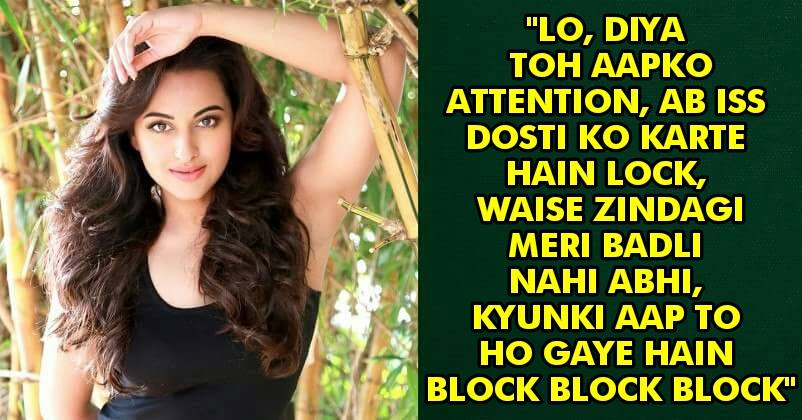 Sonakshi Sinha is that one Bollywood actress who conveys her point of view without actually being too bold or too shy, she is the perfect blend.

With her latest video, you all will agree with us. As we all know, Sonakshi Sinha’s movie Noor released this Friday. The actress is also performing with Salman Khan for the Da-bang tour. With so much of work pressure, our Noor is definitely not much bothered about the online trolls. However, there are few things that celebs are a target of quite often. Online trolls is that part of the internet which always aims at the Bollywood celebs.

Many times the celebs give up and sometimes they give it back. Our Dabangg girl is not taking it easy. Being trolled many times, Sonakshi Sinha took on herself to speak up and give it back.

There’s a twist in the tale though. The actress is not hard hitting but witty and sarcastic. She has come up with an acceptable way to express herself and that too with a quirky Shayari.

Well, this Shayari is dedicated to all the Online Trollers who are passionate towards that one thing and that is TROLLING.

Watch our Noor aka Sonakshi reciting the Shayari herself in this video:

#SonakshiSlaysTrolls: Watch @sonakshisinha aka #Noor take on the social media trolls in the most epic way ever on #ZoomStudios pic.twitter.com/Xj0pVkXmzo Now can anyone beat that? Well, we don’t think so. Sonakshi Sinha, girl you have a long way to go. RESPECT!

Kapil Sharma Thanks Sunil Grover On The 100th Episode Of TKSS! Watch This Video!
Ram Gopal Verma Took A Sly Dig At National Awards! He Also Tweeted This About Aamir Khan!