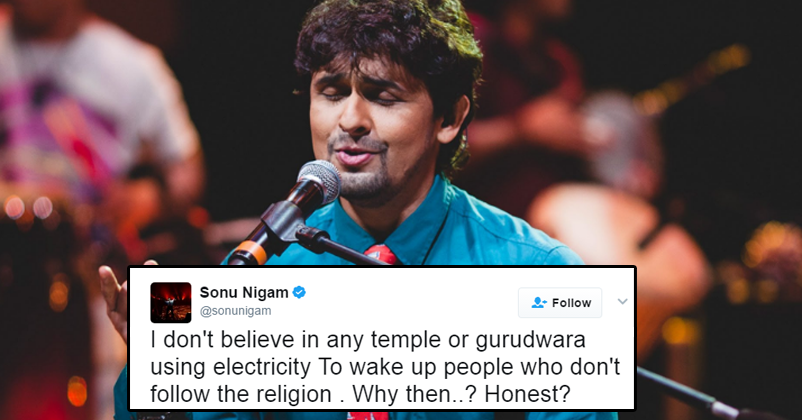 Sonu Nigam always tends to speak his heart out, but sometimes, he fails to understand that his statements can create big troubles, just like today when he called Azaan as “Forced religiousness”. Today morning, he once again landed in a soup and was thrashed by social media users for his controversial views. Sonu took to Twitter this morning and expressed frustration about being woken up by “Azaan” every morning; he went on a rant because that sound disturbed his sleep.

The singer took a dig at Muslims and their religion and this obviously wasn’t accepted by Twitter users; not only this, he even talked about Prophet Mohammad. Check out his series of tweets…

He wrote, “God bless everyone. I’m not a Muslim and I have to be woken up by the Azaan in the morning. When will this forced religiousness end in India.”

“And by the way Mohammed did not have electricity when he made Islam.. Why do I have to have this cacophony after Edison?”

It read, “I don’t believe in any temple or gurudwara using electricity To wake up people who don’t follow the religion . Why then..? Honest? True?”

His main problem was that in spite of being a non-Muslim, he has to get up to the sound of “Azaan”. It seems he hates the sound way too much, which is why he used the term “Gundagardi”.

Twitter users couldn’t believe that such a popular singer used these words. They slammed him with powerful tweets…

I am a fan of urs but this was definitely a bullshit statement. U gotta respect other religions beliefs. It's a democratic country.

Learn to accept & respect our religious differences. Living in a multi-religious society demands some tolerance.

Didn’t believe such a statement coming from you!

I couldn't believe this kind of statement coming from u sir , I respect u a lot but this is not fair 😡

A Failed Singer
A Muslim hater
A Overrated Celebrity
A Bigot pic.twitter.com/722NvacJFs

Yes Sonu Nigam ban everything that disturbs ppl . From Azaan to ghantis & jagrans to celebrations on roads. Come with me to @CMOMaharashtra

Don't want to hear the Azaan at dawn, nor do I want to hear a Chikni Chameli tuned Ganesh Aarti at dusk. Ban ALL loudspeakering of religion. https://t.co/BVu1Nb6mKR

Sonu Nigam talked only about the disturbance caused due to “Azaan”, on which someone reminded him that Jagraatas and Mandir aartis also use loudspeaker. Don’t you agree with this?

What do you think? Religious debates have become very common in India, but a celebrity speaking such things didn’t go down well with people. Share your views in our comments section below.

Trailer Of “Raabta” Is Out! Sushant & Kriti Share A Crackling Chemistry In It & We Loved It!
Adnan Sami Tweets In Support Of Indians On Snapchat Issue, Gets Trolled By Pakistanis