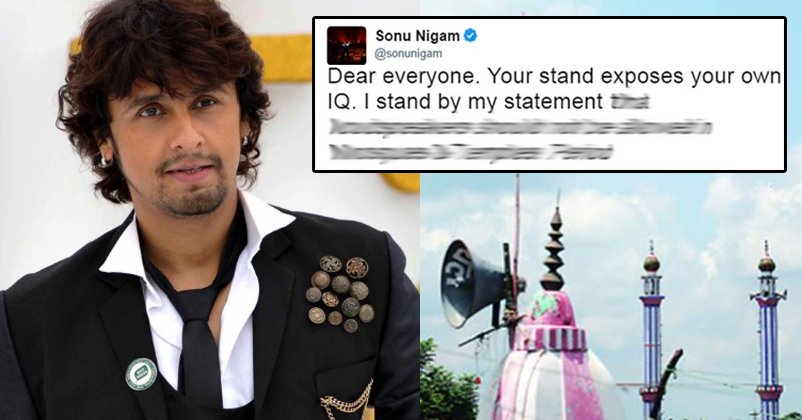 “Religion” is a very sensitive topic and people can spend hours, rather days debating on it. One must understand that it’s not the religion that’s creating differences but people’s mentality that sparks off controversies. Something similar happened with Sonu Nigam yesterday, when he spoke about Azaan disturbing his sleep.
People noticed the term “Azaan” and termed him anti-Muslim, but it seems they couldn’t spot his tweet which talked about Gurudwaras and temples.

Without understanding the true meaning behind his posts, some started supporting him while some went completely against him, all thanks to their wrong perception.

If we sensibly think over this matter, we might understand his perception clearly.

Our country surely grants the right to practice religion and it similarly gives us the right to voice our opinions too. We all should collaboratively think and accept people’s opinion that is good for all.

Practicing religion is very important and we respect the morning Azaan and Aarti. We want our country to stand united with such small gestures that make us love all communities. On the other hand, we also want welfare, good health. In such a scenario, it is not the Azaan or Aarti that is making a problem but the loudspeakers.

People who work late in the night or study late until wee hours, get a disturbed sleep in the early morning. This is the point Sonu Nigam tried making, but no one understood the core of it.

He clarified his statement once again on Twitter, he wrote: Dear everyone. Your stand exposes your own IQ. I stand by my statement that loudspeakers should not be allowed in Mosques & Temples. Period

Some people are supporting Sonu Nigam while some are bashing him up on his stand. Some leading Media websites are taking up one particular tweet on Azaan and shaping it against the Muslim community. For those who missed his actual worthy tweets, please check out his entire explanation here: Once we need to go beyond communalism to understand the fundamentals of what a person is intending to say. What do you guys think about this? Do let us know in the comments sections.