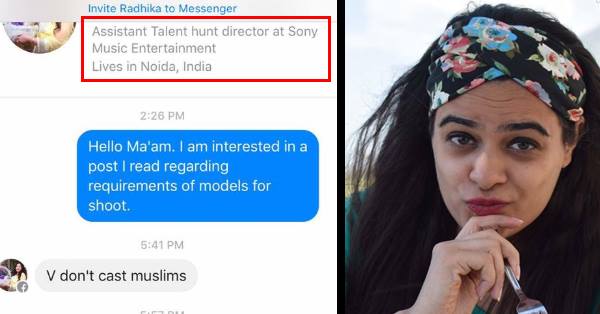 There is absolutely no denying the fact that people do discriminate not only in India but all through the world on the basis of color, cast, creed, religion etc. At one fell swoop, it’s utterly true that discrimination is one of the major evils which are making our society hollow from within, weakening its roots and filling it with hatred that is never going to be beneficial for anyone, be it White or Black, Hindu or Muslim.

Time and again, we have come across a number of incidents and one more time, a representative from a popular and reputed company has done something that has outraged social media and invited criticism.

We are talking about the disgusting statement allegedly made by Sony Music Entertainment which does not seem to open to hire models belonging to Muslim community “fearing they could be terrorists” and this remark has stormed web with detestation for Sony.

Recently, the chat conversation between some Muslim applicant and Radhika Saini, director at Sony Music Entertainment (as claimed by her) leaked and it clearly gives an idea of appalling discrimination still prevailing in the society. Below is the screenshot of conversation which took place between Radhika whose designation has been described as “Assistant Talent Hunt Director at Sony Music Entertainment” and some Haider and it is going viral for all the wrong reasons! As you can see, when Haider showed his interest for the role, Saini bluntly said “V dont cast muslims” and on asking the reason “May I know the specific reason for that?”, Radhika again made a sickening reply, “as they could be terririost that is why”.

Shruti Hasan Ali, a Facebook user, confirmed the incident saying, “This incident happened with my brother in law! Discrimination- is not new and this is appalling. When the biggest actors in our country are Muslims, then why can’t a Muslim kid try for modelling? Is this the company policy or the assistant talent hunt director feels this way?”

When Syed Salman Haider was asked about it, he confirmed, “Yes it happens between Me and Radhika Saini (Assistant talent hunt director of Sony Entertainment India) on 3rd of May. I had approached her asking her for work after I went through her status which read she’s looking for models. So I texted her on Facebook and that’s the reply I got.”

This no doubt irked netizens who slammed her for such a shameful approach and attitude. Nevertheless, Radhika further maintained that some Muslim hater group hacked her account and talked like that. Agent Orange; World’s Deadliest Secret Service Agent
Do You Know Why Pen’s Cap Have Tiny Hole At The End? Here’s Why!