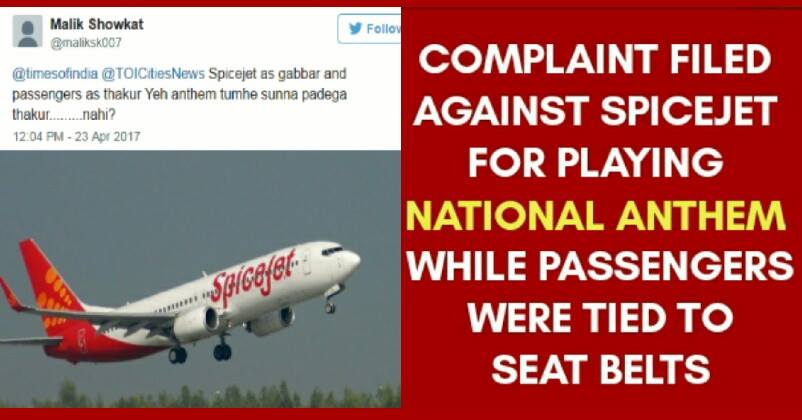 An accidental issue can become a national one and this news will become a legit proof to this fact.

A Spicejet flight that was flying from Tirupati to Hyderabad on April 19th faced some unwelcoming criticism from its passengers because they played National Anthem just when the flight was about to land at Rajiv Gandhi Hyderabad International Airport.

It is pretty obvious that passengers couldn’t really stand up and give the due respect to the anthem it deserved as the flight was just landing.

The airlines were quite indifferent to the entire fiasco and this hurt the sentiments of one of the passenger. That is when the passenger, who is a bank manager by profession, chose to lodge a complaint with the airlines’ crew.

He had made a video of the situation that happened on the flight and with the help of that he lodged a complaint. The leading daily reported that the complainant was traveling with his wife and one and half-year-old kid.

According to the complaint, nobody in the flight was in the position to pay the respect to the anthem. One of the cabin crew switched off the National Anthem that was playing in the middle only but then he switched it on again.

The National Anthem was played by mistake as one of the flight crew accidentally selected the wrong number on the playlist and the anthem started playing. Realizing the mistake, it was stopped and regretted later, this is the statement given by SpiceJet spokesman to a leading daily.

“We have pre-recorded national anthem on our aircraft playlist to be used appropriately.”

Well, here are few people on Twitter who had some interesting reactions on the same:

Air safety be damned. SpiceJet is out to prove they are bigger nationalists than others. https://t.co/ZCsyMF9mWx

This is annoying and bad. How come people will stand in aeroplane? One should respect our national anthem but not in this way.

Well, mistake or a disrespect to our National anthem? What do you guys think of this fiasco? Let us know in the comments section.