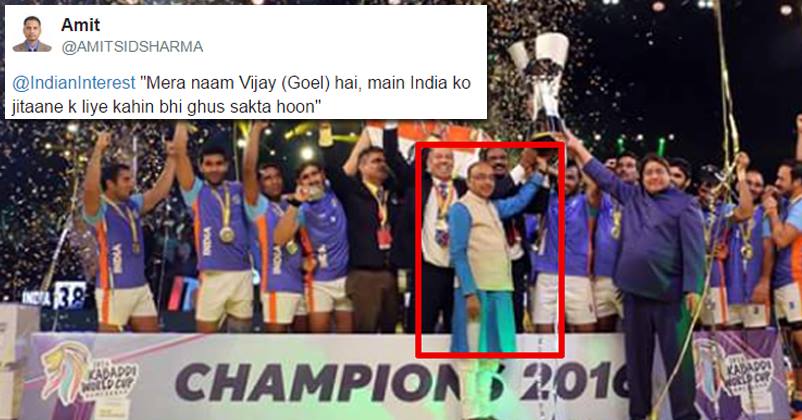 BJP Leader and Union Sports Minister Vijay Goel, has always been in news for all the wrong reasons. Remember he had to face the wrath of people for making a caricature of himself Rio Olympics? Then, he hit the headlines for getting confused between Duttee Chand and Srabani Nanda (Famous athletes) and also for his selfies. Not only this, he even misspelled the name of Dipa Karmarkar and had to face a lot ire for the same.

Fresh update is that once again Vijay Goel has become a target of all the trolls; this time it is for stealing all the limelight in the picture that was taken with Kabbadi champs after their world cup win. While the team was busy celebrating the joy of their win, Vijay Goel was being trolled. What happened was that the pic of athletes with the trophy was going viral for 2 main reasons. Firstly for enjoying this glorious moment and secondly it was because Vijay Goel, who presented the trophy to the team was standing right in front of them and this is what didn’t go down well with the people. Everyone felt that he wants to steal all the attention!

People also tagged PM Modiji and asked him to ‘Sack’ the minister, because he just can’t get over these publicity stunts.

Have a look at the furious tweets…

@VijayGoelBJP That's how you steal someone else's thunder. Sad how someone had 2 tell you 2 step away at the end. You couldn't do it urself pic.twitter.com/Z5GU4PYOMa

On this, the minister replied too…

I went to cheer for the team and was also invited to present the trophy, you are free to interpret as per your wish.

Dear @narendramodi there is a good reason to sack Vijay Goel now. The man is such a disgrace, please see the picture below! https://t.co/r8e9iHJLaC

Has he won the world cup himself?

Vijay Goel ji not leaving the podium like he has won the world cup himself.

Hankering for cheap publicity, trying to steal attention from players.

Get out of the way. No one wants to see you. pic.twitter.com/A5E9VHo92M

Entire country has seen what you have done, if u r der 2 present trophy y r u holding it and posing for photo

Vijay Goel deserved these tweets, don’t you think so? Twitterati doesn’t spare anyone who tries to come in the way of our Champions! What’s your take on this? Do share your views in our comments section below!

Shoaib’s Tweet In Incorrect English United Indians & Pakistanis! Their Trolls Made Him Delete It!
Harbhajan Singh And Virender Sehwag Take A Dig At M.S Dhoni By Using W.Saha