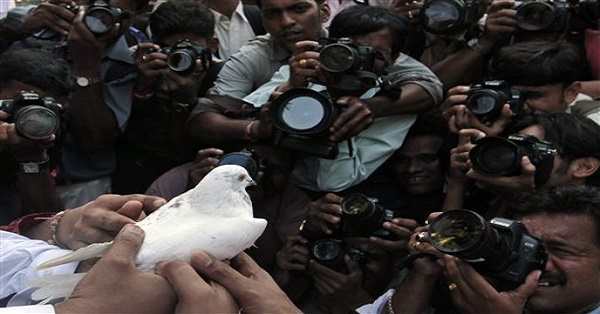 Arrival and capturing of a white ‘spy’ pigeon which seems to have come from across the border in Punjab’s Pathankot has created an atmosphere of unrest and compelled Punjab Police along with intelligence sleuths not to sleep peacefully. It came 2 days following the incident when IB alerted cop of Punjab regarding Indian Mujahideen’s likelihood for being effective in the regions of Pathankot & Jammu. Since the winged ‘intruder’ was found with a stamped message as well as an object identical to wire, it alerted security organizations for closely observing its flight to the country. The so-called message’s some fraction had been in the Urdu language; however, numbers are found to be Narowal’s landline telephone in the country of Pakistan.

On Wednesday, ‘Spy’ pigeon landed in the village of Manwal which is just 4 kilometers from the Pakistan border at Ramesh Chandra’s house at about 6:30pm. Ramesh who is a barber by profession has a son who got suspicious at Urdu writings and reached the closest police post with that pigeon. As said by Chandra to TOI, “Unfortunately, mobile phones rarely work in the border areas. My son ran to the nearest police post.”

Afterward, pigeon was taken to Pathankot’s veterinary hospital for an X-ray but it didn’t seem to have given a hint or evidence. In the words of Rakesh Kaushal, Pathankot SSP, “Nothing adverse has been found, but we have kept the bird in our custody.”

He added, “This is a rare instance of a bird from Pakistan being spotted here. We have caught a few spies here. The area is sensitive, given its proximity to Jammu, where infiltration is quite common.”