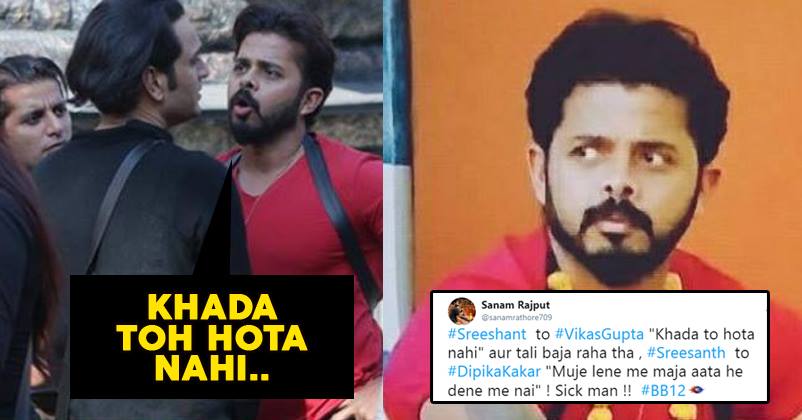 The atmosphere inside the Bigg Boss 12 house is heating up with Sreesanth’s unpleasant remarks and derogatory comments for the housemates like Karanvir Bohra and Rohit Suchanti and guest Vikas Gupta who stepped in the house for some time with the winner of Bigg Boss 11 Shilpa Shinde.

Sreesanth who is already making headlines for all the wrong reasons and misbehaving with other contestants got into an ugly fight with Vikas Gupta and insulted him with offensive words. During the Rangoli task, he called Vikas a loser to which the latter repeatedly termed him as ‘badtameez’ (ill-mannered). 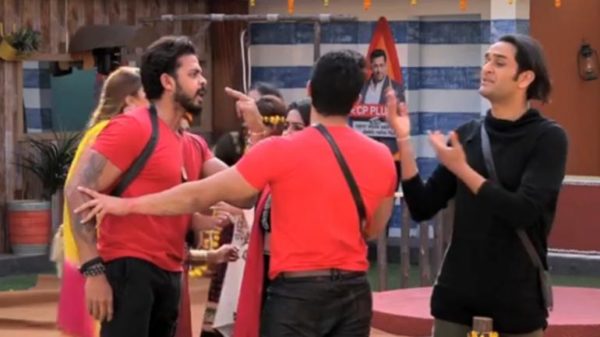 After the heated war of words, Sreesanth lost his temper and when Dipika and other housemates interfered, he teased Vikas by saying that he hides behind women.

This is indeed a double-meaning sentence that appears to raise questions on Vikas’ manliness and by Khada, it seems as if Sreesanth talked about private part. However, here we need to give him benefit of doubt as we know that his Hindi is not good and due to the language issue, he might have unintentionally hurt Vikas and there may be a case that he was not actually intended to say this.

We don’t know the actual meaning of Sreesanth’s statement and can only make guesses about it, for language problem of course. However, Twitter has already proved him guilty and slammed the Indian cricketer in the worst possible manner for his cheap antics and insulting behaviour.

@Bhuvneshwarisr1 @sreesanth36
I am not sreesanth hater just i didn't understand
1.his anger for poor people
2.His comments on anybody's sexuality.
3. comment on KV "beechaka"
4. Comment on vikas " mard hone keliye khada hona padta hai"
5. Why he thinks girls are powerless.

I am sure Sreesanth has some upbringing issues. The way he behaves is unpardonable. He told Vikas Gupta something like 'tu mard nahi hai. Khada nahi hota hai'. After vikas protested he tried to cover it up. Now I know Y @harbhajan_singh slapped him. @TheKhbri @mayurdubey

I think that he should be out as soon as possible otherwise no use of watching a show #bigboss
Should be named #torcherwithsree
N what #sreesanth thinks of himself
Bada mard samajhta h kya apne aap ko jo sabse bolta rhta h k tu to beech ka hai,khada hoke dikha #disgusting

He is a loser, I never liked Vikas Gupta in n never supported him during season 11 but things #Sreeshant said about him "mard hone ke liye khada hona padhta hai"..is disgusting.. i hv never seen a loser like #Sreesanth in my entire life.. he doesn’t deserve to b in dt house

If you can support a man who openly threatens someone for something he did himself did wrong, tells vikas “tu admi hai to khada hoke dikha”. Tells dipika some shit .. shame on people supporting sreesanth.#ShameOnSreesanth

@lostboy54 respect for u dude. Khada nai hota sentence should not be used in a family show. @sreesanth36 u were calling him casting couch.
What about u dude…betting kand bhul gye apna.#hate_for_yoy_sreesanth

What do you think about Sreesanth’s remarks and acts? Let us know your views.