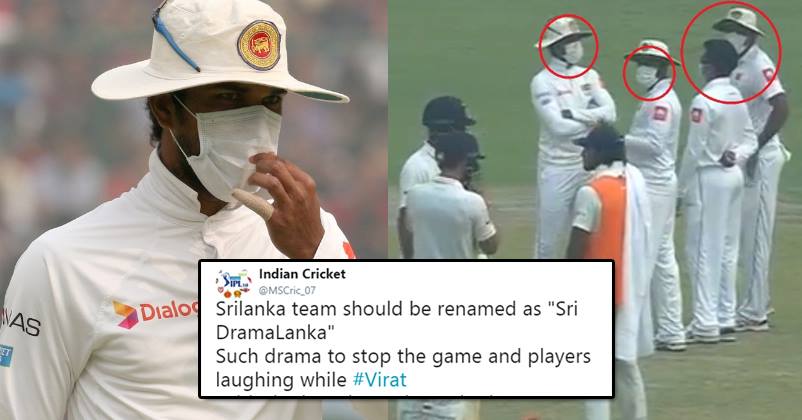 The air quality and pollution levels of the national capital, New Delhi, are matters of serious concern for quite a long time now and the game of cricket has also become its target. The air of Delhi is quite smoggy nowadays which is posing problems in breathing. Smog is a mixture of smoke and fog.

The 3rd test of the India-Sri Lanka series is being played at Feroz Shah Kotla Stadium, New Delhi, and the Sri Lankan players were seen wearing mask during the game. 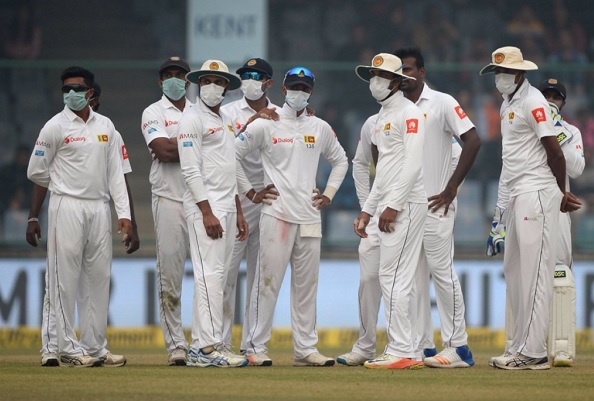 The Sri Lankan bowlers seemed to be in trouble as they were coughing and having breathing problems and they underwent for medical checkup as well.

The game was interrupted many times which frustrated Indian skipper Virat Kohli and he declared the innings at the score of 536 runs. 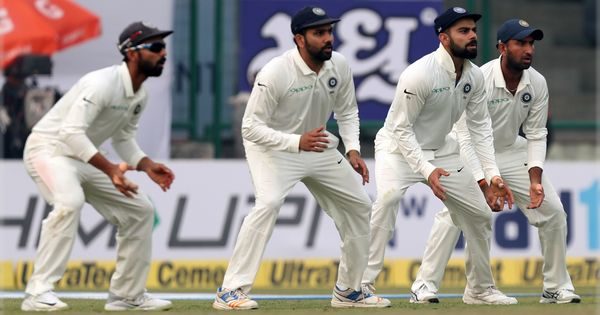 This is for the first time that an International match has been held up due to pollution and it is seriously something which will hamper India’s image.

However, Twitter is of different opinion as they feel that Sri Lankan players are faking it all since they are already 1-0 behind in the series and in this match as well, they are in a difficult situation. Here are some selected tweets:

Shame on the Sri Lankan team:

What Sri Lanka has taught world cricket…when You are losing, ask your physio to run in the field to kill time. When you out, cheat DRS from dressing room. When you cant bowl, cough and lie down. and when you can't perform, hide your face behind a mask #INDvSL

Smog not affecting 16k men, women and children but these 15 sour losers from Sri Lanka. Disgrace!!! 😡😡

hahahahaha…. India declare… Virat gesturing "we will bowl now"… this was an obvious call from him given the farce on display. Poor gamesmanship from Sri Lanka. Ridiculous. #IndvSL

All the respect that I've had for Sri Lankan team all this while is just vanished. Shameful act by Sri Lankan team. Ban Ind vs Srilanka matches.#INDvSL pic.twitter.com/e1ZKix3mpD

They gave up without fighting:

India forced to declare because Sri Lanka players cannot breathe due to high smog in Delhi.

Giving up even without a fight.

He: Where are you from?

She: You Idiot, Delhi is doing something for fog now. Don't tease.

He: I mean, I'm from Sri Lanka.#INDvsSL

Wow.
Kohli on 240.
Sri Lanka say they can't field because of pollution in Delhi.
This alone may drive us to reduce pollution.
Lung diseases are OK.
But, because of us Kohli couldn't get a triple century!

Precisely. Lankan players laughing and clapping as they walked in. If it is too polluted to field and bowl, it should be too polluted to bat as well. Sri Lanka should forfeit both innings, ideally. #IndvSL https://t.co/saE1kfXoUr

Sarfaraz Ahmed Was Asked To Pick Better Player Between Virat & Joe Root. Here’s What He Said
Arnold Defended Sri Lankan Players With Regards To Smog. Got It Back Perfectly From Indian Fans