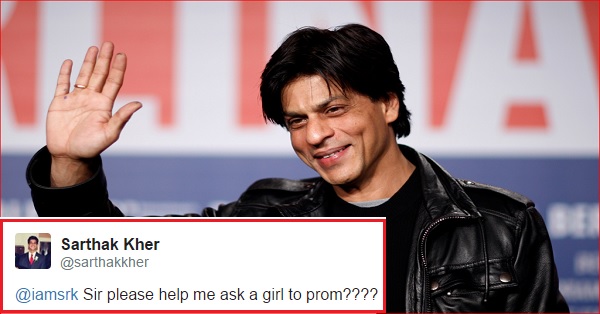 A Guy in love never wants to leave any stone unturned to get his girl say a “Yes”. We reach out to love-gurus and all the information available on the internet on ways to ask a girl for a date or for prom or how to wo her. So did Sarthak Kher. He went beyond and reached out to the King of Romance, Shah Rukh Khan for help.

It was way back in Apr, 15, when he tweeted SRK to help him ask his girl out for prom –

@iamsrk Sir please help me ask a girl to prom????

@sarthakkher if I ask she won't go with you….ha ha.

Sarthak never stopped trying, and by the end of 2 months, his beloved said “Yes”. He was elated enough to inform SRK about the same through another tweet –

@sarthakkher treat her with dignity gentleness and love…and pepper it with a bit of humour.

No wonder, gestures like this have made him the ‘Badshah”, “King of Romance”

Would you reach to your favorite celebs for the same? Let us know in the comments below.