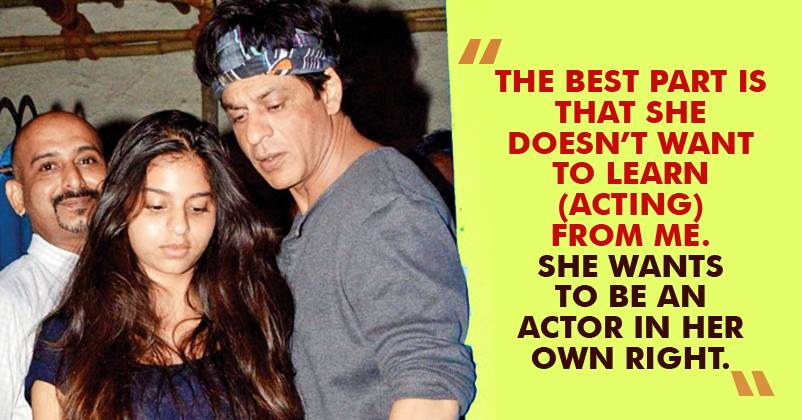 SRK has been the King of Bollywood for years now! He is known for his amazing performances and stupendous acting skills and will always be remembered in the history of Bollywood. Apart from being a great actor, SRK is a super-daddy too.

Yes, his daughter Suhana and sons Aryan and AbRam just love their dad to the core and in return, get pampered in all possible ways. Few days back, we had reported about how SRK had laid 7 rules for the man who wants to date his daughter Suhana. No doubt, he is extremely protective about her and can go to any extent to make her happy. When we talk about his kids Suhana and Aryan, the only thing which comes to our mind is their debut in B-Town. In an interview with Femina, SRK revealed that his son has enrolled in a film-making course (4 years) and won’t make his debut anytime soon.

In the interview, SRK also talked about Suhana who wishes to become an actress. Although he is a darling father, he has certain rules that need to be followed. Shah Rukh Khan says

“I have a strong take. I’d like her to be on the cover of magazines like all my heroines are, wear any kind of clothes she wants to wear, and look sexy and beautiful. I want her to feel attractive, beautiful and respected, and more importantly, I want her to work hard. There are days when I feel down—the only reason I get up and go to work is when I think of her. I have only one mandate where she’s concerned: she can act, but she has to study first.”

At the same time, SRK also says that Suhana doesn’t desire to learn acting skills from him. She wants to learn it on her own and earn a name for herself. He adds

“Suhana is more theatre-oriented and has been doing plays in college. The best part is that she doesn’t want to learn (acting) from me. She wants to be an actor in her own right. She can be an actor if she has the passion and guts to work five times harder than me and get paid 10 times less than I do, if times don’t change for women actors. I want her to experience what my female co-stars have gone through. My daughter will be an actor like them and I want to feel the pain.” We definitely agree with King Khan and we are proud of him that he’s such a wonderful parent. For Suhana it’s very easy to get an entry into Bollwyood, but the approach Shah Rukh is using is certainly worth appreciating. What do you think? Do share your views in our comments section below.

Twitterati Went Crazy After Dangal Won 4 Awards! Here’s How They Reacted On Filmfare’s Winner List!
Fake Salman Khan Voter ID Card Spotted, Reveals His Age To Be 64 And Not 51