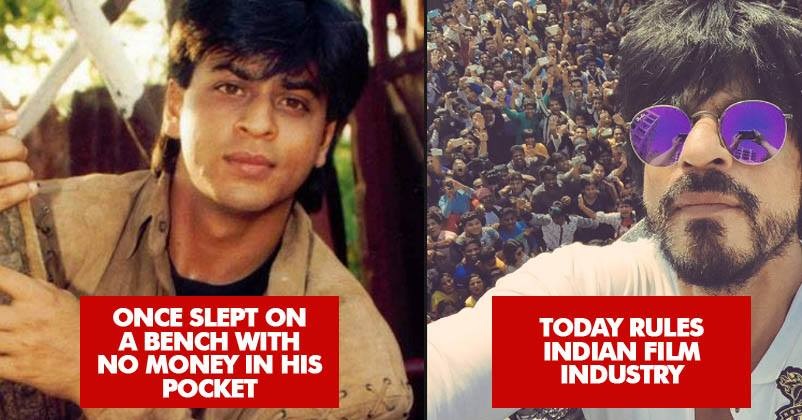 Isn’t the name just more than enough to introduce the Bollywood Badshaah? Though, it’s Shah Rukh Khan’s 51st birthday but with each passing day, he is making us believe that ‘age is just a number’. The self-made man, Shah Rukh Khan is an open book having the stories of struggle, passion, success and hunger to fulfill the countless dreams written on it. Even the fanciest word I use to praise him will fall short in his honour.

On this special day of Shah Rukh Khan, let’s recall some of the rare stories hidden behind his glamorous life…

1. Shah Rukh Khan’s granny (Maternal) named him as Abdul Rehman. However, his dad changed his name to Shahrukh Khan later on. This inspiration came from’Lalarukh’, his sister’s name Shah Rukh Khan implies to “face like a king”. Don’t you feel that SRK’s father was already aware of his son’s dedication and destiny? Well, SRK prefers to write his name as ‘Shah Rukh Khan’. He also feels lucky that his father changed his name as Abdul Rehman would never have suited a film star.

2. Shah Rukh Khan was a naughty boy as a school kid. Hindi was his weakest subject in school and all he loved since childhood was watching cinema.

Just to make Shah Rukh study his Hindi subject with all his concentration, his mother promised to take him for a movie if he passes his Hindi exam. Shah Rukh’s fascination for movies was so much that he actually studied that subject so well that he started getting top grades in it then onward.

3.The mischievous stories of SRK’s school life are endless. There is one incident when Shah Rukh acted like he was having an epileptic attack in order to bunk a class. His acting was so realistic that his teacher actually got convinced. The teacher even asked his friends to take him away and make him rest for a while. Instead of escaping directly, one of his friends went on to the teacher and asked for his leather shoe. As per an Indian remedy, it helps if you make an epileptic person smell a leather shoe. That day the teacher walked with just one shoe for the whole day. Isn’t the incident hilarious?

4. Shah Rukh Khan was passionate for acting since the starting. When he came to Mumbai as a hopeful actor, he had no place to stay. 5. If you think Shah Rukh Khan started earning in thousands and lakh during his initial struggling years then you are wrong! It is said that Shah Rukh khan’s first salary was mere fifty rupees. He was so happy with his first salary that he used that money to take a train to Agra. He went Agra to see the Taj Mahal.

6. Initially, Shah Rukh Khan decided to stay in Mumbai just for a year. He had planned to go back to Delhi after doing 3-4 films. He took this decision because he wanted to stay by the side of his dying mother’s bed. God had different plans for him! With time Shah Rukh Khan started getting success in Mumbai within that one year. Then there was no looking back. Gauri Khan during a media interaction has expressed that she wasn’t happy with the success of Shah Rukh’s first film, ‘Deewana’. As Gauri never wanted him to become a permanent part of the industry.

7. Shah Rukh Khan sold the tickets of his movie ‘Kabhi Haan Kabhi Naa’ at the booking window of a Mumbai cinema on its opening day. Yes, you read it right! Shah Rukh Khan has done every possible thing to make his name in the glamorous industry. When his movie ‘Kabhi Haan Kabhi Naa,’ directed by Kundan Shah got released in 1994, SRK decided to sell the tickets to gather as much crowd as possible. Shah Rukh Khan was paid a sum total of Rs 25,000 for that film.

8. When Shah Rukh Khan got the offer for the movie ‘Darr’ he was in the theater watching Yash Chopra’s movie ‘Lamhe’. The offer for the movie ‘Darr’ itself came on Shah Rukh Khan’s doorstep. He was with his friend Viveck Vaswani in the theater watching ‘Lamhe’. Halfway through the movie his secretary arrived to inform him that Mr. Chopra was considering him to cast him in his next movie. SRK didn’t wait for another moment and immediately went to Mr. Chopra’s office abandoning the movie Lamhe. What next? He actually ended up getting the film!

9. There is an incident when Shah Rukh Khan rejected a big banner film as they wanted to replace his makeup man! Yes, SRK is an absolute humble man. He has a lot of respect for all those people who have helped him in becoming what he is today. He was getting a big banner film when he needed it the most. But, as soon as they said that he does not need his makeup man anymore, SRK rejected the film. He considers Subhash and his makeup man – Ravi dada – his family.
He Feels immense gratitude towards Ravi dada, Subhash, Karuna, Yaseem (his personal security) and Mohan. One of Shah Rukh’s friends from Delhi, Benny Thomas told an incident of the days when he accompanied Shah Rukh to Mumbai during his struggling days. Benny told that Shah Rukh Khan, standing on the Marine Drive, in the backdrop of the setting sun, said, “I’ll rule this city one day.” Seems as if his God actually heard his inner voice.

Shah Rukh Khan’s those powerful words and his dedication towards his dreams gave us the Bollywood Badshah of today! On the birthday of such arrogant actor and an absolute humble star, we wish his films never end. We wish his era rule generations after generations.

Many Many Happy Returns Of The Day Shah Rukh!

So, Did you like these little glimpses of SRK’s life? What do you think about Shah Rukh Khan as an actor? Are you his fan? Don’t forget to leave a birthday wish for your favorite actor Shah Rukh Khan!

Day 5 Collections Are Out! Competition Is Getting Tougher & Tougher! Check Out!
B-Town Is Celebrating SRK’s B’day On Twitter & You Can’t Miss Their Awesome Wishes