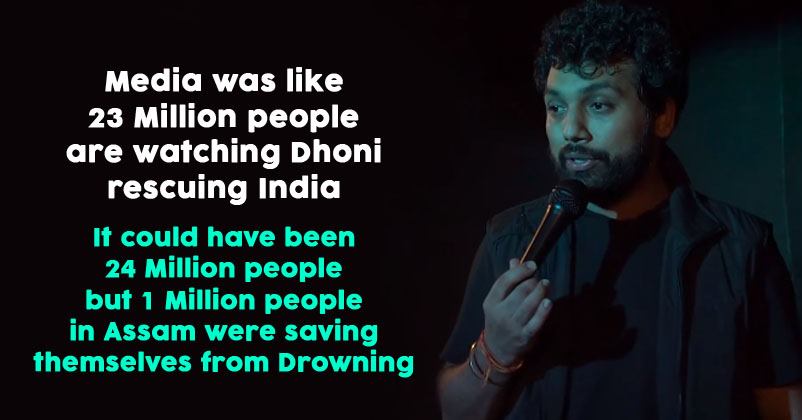 While the northeast is drowning people happy, have been more busy with the World Cup. According to the reports on almost 50 lakh, people have been affected over 33 regions in the North East. But we wouldn’t know right we are more concerned with who is wearing what, who is dating whom, etc.

In January a Mumbai based stand-up comedian Abhineet Mishra went viral on his piece on the 15 miners trapped in an illegal rat-hole mine in Meghalaya. The comedian said,” Comedy means telling jokes, but it also means you take a stand on things,” said the 31-year-old HR professional, who is a comedian by hobby.”

On Tuesday he made another video on the Assam flood. And needless to say, it went viral for all the right reasons. In the eight-minute video, Abhineet talks about the condition of Assam and how many people are suffering. He talks about people acknowledged the Kerala floods, Chennai drought, and floods, but when it comes to North-East, everyone has turned a blind eye.

Abhineet also takes a dig at the media and politicians for supporting and even taking notice of the same. He says that the floods are right in front of the eyes of the people, and yet it is not acknowledged. The video is amazing.
You will be shocked at the end of the video.

You Will Be Surprised To Know The Salary Of The Indian Team In The 1983 World Cup
This Model Stripped After England Won WC, Twitterians Calling Her UK’s Poonam Pandey