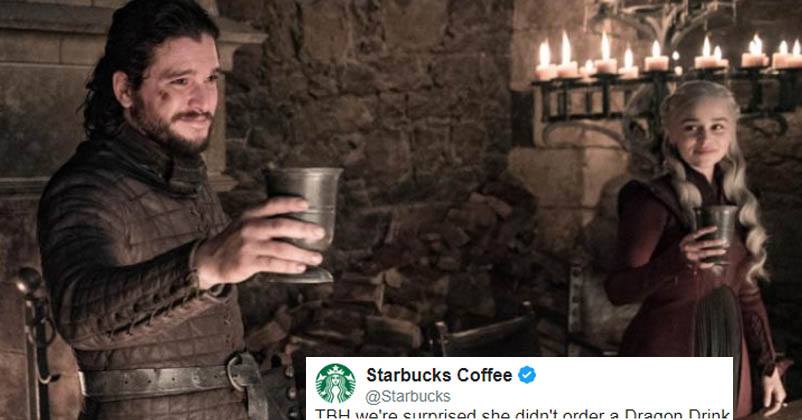 Game of Thrones season 8 episode 4 created a stir among the fans. In a particular scene during the dinner celebration held on the occasion of defeating the night king. Daenerys Targaryen being uncomfortable with Jon Snow’s popularity didn’t make the audience uncomfortable but the presence of the Starbucks coffee mug definitely did.

After the coffee cup was spotted Game of Thrones fans lost their cool how can such a humongous production can do such a silly mistake it was supposed to be a dragon drink rather than coffee. As the coffee cup was evident on the dining table.

The coffee cup gaffe went out of proportion, Twitter is exploding with memes from the episode.

HBO accepted their mistake and tweeted ‘News from Winterfell. The latte that appeared in the episode was a mistake. #Daenerys had ordered herbal tea.’

The latte that appeared in the episode was a mistake. #Daenerys had ordered an herbal tea. pic.twitter.com/ypowxGgQRl

The American coffee company Starbucks didn’t stay behind and took advantage of this situation. Starbucks took to their twitter handle and tweeted ‘TBH we’re surprised she didn’t order a Dragon Drink.’

Well, that is how you promote your company by making the world laugh. All the entrepreneurs don’t forget to take a note from the Starbucks promotion strategy.

There is a limited number of Been There mugs available only at select stores in The North.

The makers have finally re-edited the episode and removed the 0.2-sec scene from the episode and it is available for the online streaming. This by far the biggest blunder to have ever happened in the history of Game Of Thrones.