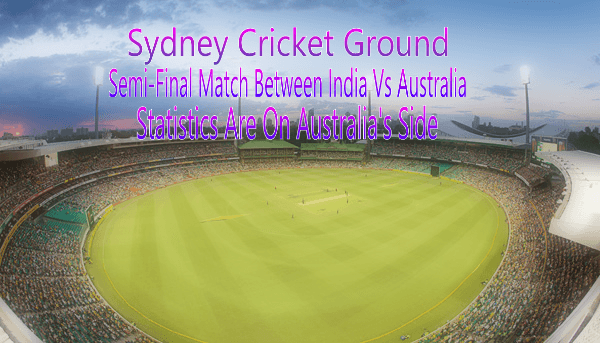 As Australia won over Pakistan in the quarter-final match, they will now face India in the semis. So I guess it is the perfect time to look at some statistics about previous India-Australia meetings in the world cup.

India and Australia have played against each-other for ten times in all the previous cricket world-cups. While India has won 3 matches among the ten, Australia leads with 7 victories. Australia has a better record than India in this case. They have been to semis six times before this world cup. Among the six matches, they only had a tie-game with South Africa in 1999 and they have won the other five semi-final matches.

India have played only one world-cup match in Sydney against Pakistan in 1992. India won that match but Pakistan won the tournament. The “famous” Javed Miandad vs Kiran More thing happened in this match. Australia have played three world cup matches in Sydney. Among the three matches, they have won only one time and that too in this world cup against Sri-Lanka. India won over Australia in the previous world-cup meeting in 2011. They played against each-other in the quarter-finals and Yuvi led India to win. 7. India Have Some Advantage –

If the semi-final match is called off, India will advance to the final as they finished higher than Australia in the group-stage.

The pitch of Sydney will most likely favour spinners. India has some of the most versatile spinners in the world right now while Australia depends on pace-bowlers. So what do you guys think about the upcoming semi-final match? Who’s gonna win this time? What about the statistics?

These 11 Actresses Looked Very Different Before Entering Bollywood. Money Can Change Everything
10 Things That Girls Talk In Private