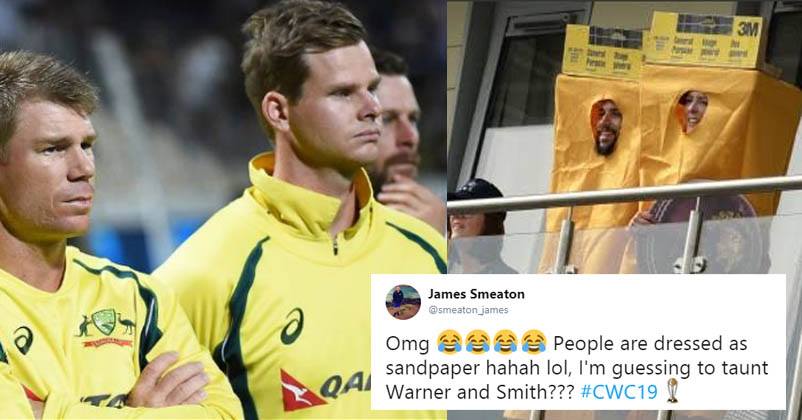 Steve Smith and David Warner finally returned to international cricket after the ban of 12 months. The ban was imposed on them after the ball-tampering scandal in South Africa last year. The duo played against Afganistan in the ongoing ICC world cup and helped their team win by 7 wickets. But fans still seem angry with them as they taunted and booed them in the stadium.

Although Australian coach Justin Langer requested them not to boo them during the world cup as they have already paid the price for the mistake. The coach asked everyone to respect them but they didn’t listen and continued to shame them on the field as well as on the social media.

Some cricket fans took an extra mile to mock them and dressed in sandpaper outfits. As soon as the pictures from the stadium went on the internet, they went viral and within hours the online world was onto them.

Some creative fancy dress from one of the flats overlooking Bristol!#AFGvsAUS #CWC19 pic.twitter.com/Wz9tfEUe3o

Huge boos for Australia in general and Warner in particular at the cricket. Well done Bristol, keep these old traditions up. #warnerwatch

However, the fans reaction didn’t affect either of them and Warner scored 89 runs off 114 balls while Steven Smith took 2 wickets.