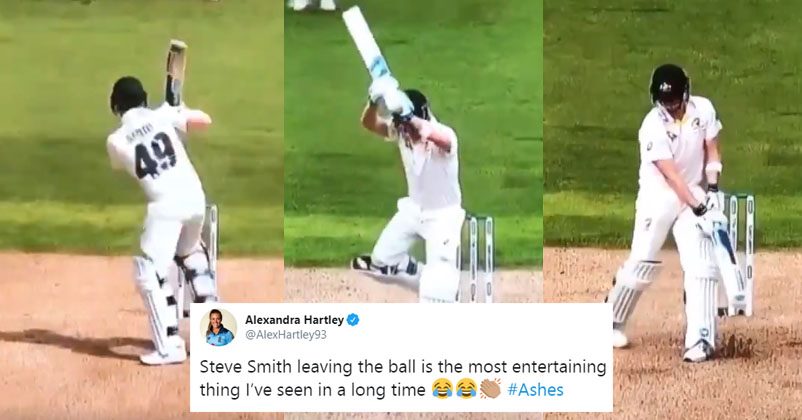 Australian player Steve Smith made his comeback in the test cricket with the ongoing Ashes, played between England and Australia. Last year his involvement was found in the ball-tampering scandal at the Newlands in Cape Town.

With the compilation video, Alexandra tweeted, “Steve Smith leaving the ball is the most entertaining thing I’ve seen in a long time 😂😂👏🏽 #Ashes”

Steve Smith leaving the ball is the most entertaining thing I’ve seen in a long time 😂😂👏🏽 #Ashes pic.twitter.com/nuuyRrDpaJ

Twitter also couldn’t help reacting to the hilarious ‘leaving the ball’ video. Here are some of the twitter users reaction:

I watched this more than once.Steve Is mocking the bowlers by the way he is leaving those balls.Steve is a batsman of a class his very own. I noticed he was a little subdued(WC) because of the ban embarrassment.I guess he will get over it and cricket lovers will enjoy his batting

Looks like he keeps being attacked by a wasp.

Even when he's not hitting it, he's entertaining!

😂Yeah, i think he has started practicing Dance.
But for me #CourtneyWalsh leave is always stays at the top. pic.twitter.com/5Q4owRHUVi

There's a fine line between entertaining and annoying.

Continue Reading
You may also like...
Related Topics:Ashes, england vs australia, Steve Smith