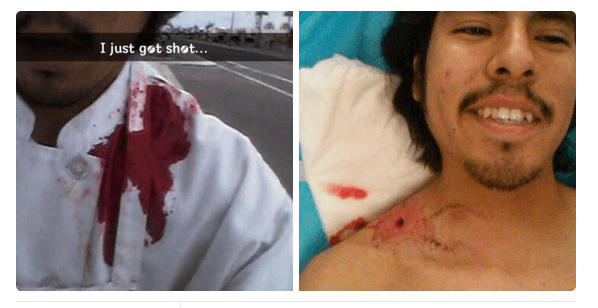 The world is getting mad and mad every day. Selfie maniacs are all around the world, people take selfies in the funeral, with a corpse and the coffin. Truly, a lunatic world is getting ready. And, in an another instance, its a student from the USA, this Wednesday on March 18 a US student Isaac Martinez was shot over the shoulder during the violent rampage in Arizona.

Instead for calling for help, Isaac took the situation, oops the camera in hand and started posting his selfies on a social media platform. The bloody selfies from the tech savvy Martinez were all over the web. He did not stop here, even while driving to the hospital, he took a few selfies of his shoulder where he was shot. And, if that was not enough, Isaac also took a picture of himself lying in the bed, bare-chested with a white dressing on his injured shoulder.

The shoot actually occurred when Martinez was parking his car in the eating joint where he works and the alleged shooter Ryan Giroux demanded the keys of his car and Martinez flatly denied.
The Arizona rampage on Wednesday took a very nasty turn killing one person and injuring five. But what is more dramatic is the fact the selfie maniac did not called 911 immediately rather preferred to take his pictures first.

Is not the selfie craziness getting out of control?