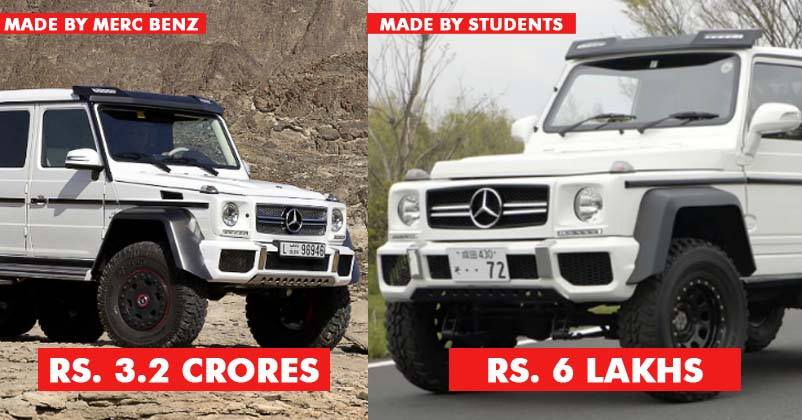 Mercedes Benz G63 AMG 6×6 is a wonderful way to flaunt your style. The SUV is known for its high performance, large body and 6 wheels. Sadly, Mercedes has stopped producing this vehicle, which is why it is rarely available in the market.

Even if it is available at some places, the price is very high. Want to know how much it costs? Well, you need a whopping 3.2 crores to buy that vehicle.

However, the same 6-wheeler was spotted in Japan at a price of just Rs 6 lakhs. How’s that possible? You will be stunned to know that a group of 15 students from NATS i.e. Nihon Automotive Technology School, have come up with a clone of the SUV; since it is a replica, the price is very low.

Here’s the pic of the original version… And here’s the pic of the replica… The clone was based on 2 JA11 Suzuki Jimny Kei trucks, but the flawless finishing made it look like the original. The rear of the Jimny was chopped and frame length was increased, so that an additional rear axle could be accommodated. Other parts like bumpers, lights, logo and front grill were completely original. They used Jimny’s engine instead of using the Mercedes G-class one.

In order to give the same look, students molded the bumpers. Even the bed was custom made. The way they designed the vehicle is pure genius; it was basically made for a Tokyo Auto show and not for sale.

Both the versions are so similar that if you aren’t a car freak, you won’t even be able to differentiate between original and clone. The students have put in a lot of creativity into it and they deserve an applaud.

RaGa Slammed Modi For “Gau-Rakshak” Statement! This Time, Twitter Supported Rahul’s Views!
He Wanted To Marry Her At 3 But They Separated! After 20 Years, He Actually Got Married To Her!