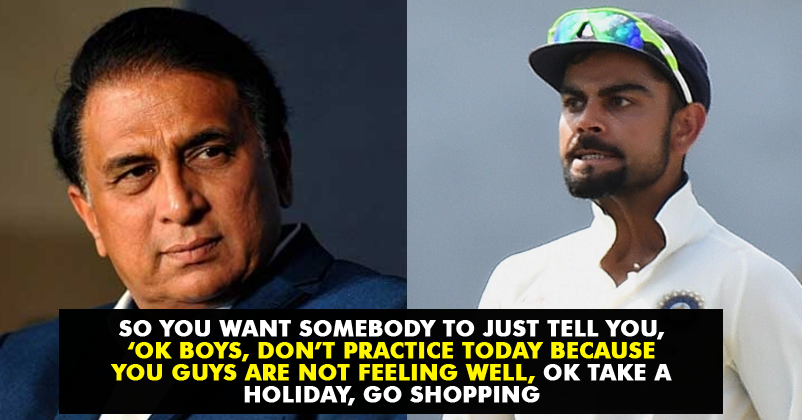 On Tuesday, Anil Kumble stepped down as the head coach of Indian team and this disappointed many. Media always gave signals about dressing room controversies between him and his players, but his resignation has surely come as a surprise to many.

After Kumble opened up about his side of the story, Sunil Gavaskar blasted at the players. He urged Virat Kohli to clear his side as soon as possible. Gavaskar is disappointed by this whole episode; talking about Virat in an interview with NDTV, he said,

“My advice to Virat would be to make a statement and make things clear. Kumble also needs to clarify who in the BCCI informed him about Virat’s unhappiness about him. A statement from Kohli will help clear the air, saying this is what I feel and my issue with Kumble.” He blasted at the players who feel that Anil is a hard taskmaster and said,

“So you want softies. You want somebody to just tell you, ‘ok boys, don’t practice today because you guys are not feeling well, ok take a holiday, go shopping’. You want that kind of a person. If somebody is a hard taskmaster and he has got you results like Anil Kumble has got over the last one year. If any of the players are complaining, I feel those players are the ones who should be left out of the team.”

Sunil Gavaskar further said that since the time Anil has taken over as the coach, India has shown a great performance. He said that differences are seen in every team, but the results should be noted.

Gavaskar strongly feels that Anil should have fought for himself; in his words,

“Anil must have had his reasons (of resigning). I would have thought Anil would carry on. Once the CAC expressed their confidence in him, Anil should have stuck around. Hope he will take it on the chin and comes back stronger. But it is the first time a known fighter like Anil did not stand up.”

He doesn’t know what went wrong between Kohli and Kumble, but he is very disappointed with the outcome. Gavaskar concluded by saying,

“Anil’s experience as a player and as an administrator needs to be utilised. CAC should be doing more for Indian cricket than just selecting the coach.” Gavaskar has a valid point here; coach should always be strict and only then, good results are guaranteed. No doubt, Anil Kumble was a hard taskmaster but he did a lot for Indian cricket and the results were clearly visible.