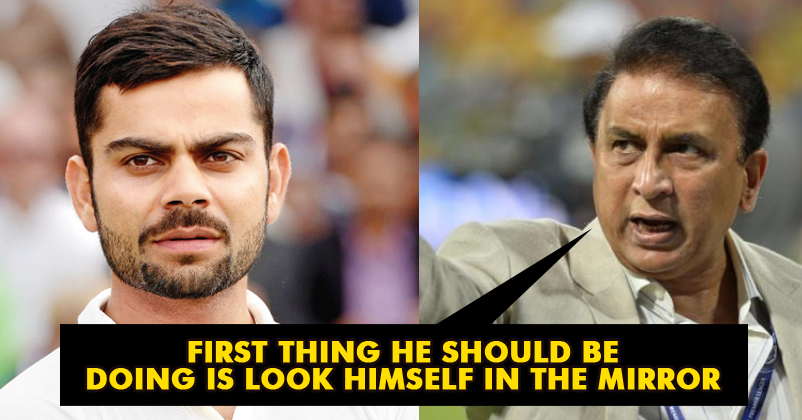 Virat Kohli is a name taken with great respect in modern cricket. His brilliant and aggressive strokes have led the team towards the victory many times and for this very reason, he rules the hearts of millions of fans.

However, in the IPL 10, his performance has been very disheartening. Neither he has been able to score well in these matches nor was he successful to inspire his team as a captain. In the latest match against Kings XI Punjab, Team Virat Kohli failed to chase a small target of 138 and finished their run at just 119. It was a shock to see the team falling like a house of cards in front of opposition’s bowling attack.

Criticising the performance of Kohli, former senior cricketer Sunil Gavaskar said in a post-match analysis for the official broadcaster that his performance and approach needs self-analysis and he needs to see the mirror.

Gavaskar also suggested Kohli to bat with more responsibility, as he is the captain of a team that is not doing well in the IPL.

“He (Kohli) has got to say to himself that he is the captain. He has got to stay there. He is not in form so stay there and he should work himself with proper cricketing shots then widen the scope of the shots,”

Gavaskar also criticised the way other RCB batsmen got out in the KXIP match.

“Your main batsmen went for the glamour shots instead of looking to play proper cricketing shots. Get the boundary. Between a four and a six the difference is two runs. Because you hit the ball in the air (for six), the risk percentage goes up to a 100.”

However, on Twitter people are not trolling him. Infact they are posting motivational tweets for Virat which is something really great to see. Have a look;

@imVkohli U are true inspiration to billions ,now its hard time ..Days will be smoother in future #love #viratkohli.ALL IS WELL

RCB has won only 2 matches out of 12 they have played in this season. We hope they bounce back soon to prove their mettle again and we believe they will be able to do it. And Virat, You are a Champion Man! Show us your magic again.

What do you think about this? Tell us in the comment section.

Priyanka Chopra’s Post On Nirbhaya Case Verdict Is Bang-On! It Will Touch Your Hearts!
Dangal Is Winning Hearts In China Too! Here’s How Much It Earned On The First Day!