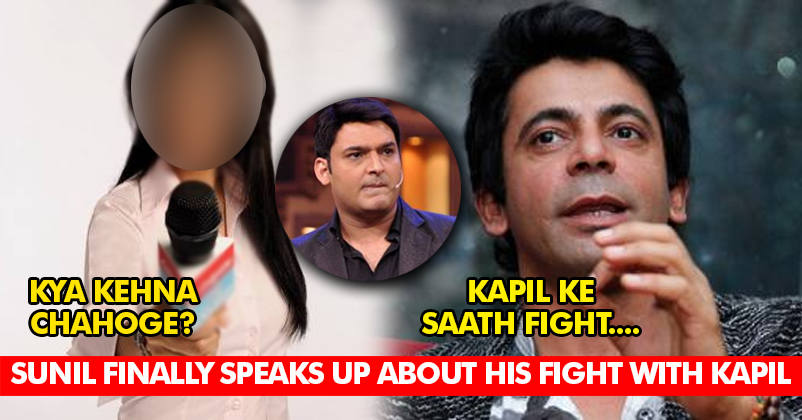 Sunil Grover has finally taken a decision to break his silence over the entire brawl that happened between him and Kapil Sharma.

The ace comedian has moved on from the incident and it took some time for him but he has taken a final call. He won’t return to The Kapil Sharma Show though he believes in not holding any grudges.

“I’m here to work, not to have an argument with somebody and walk out of shows. I just want to make people laugh. Whatever happened was unfortunate, emergency landing ho gayi meri.”

His sudden exit was followed by three more team member calling it quits with the show. As we all know Chandan Prabhakar, Sugandha Mishra, Ali Asgar has also not returned to the show after Sunil Grover’s exit.

The show rating has dropped after their exit. However, Sunil Grover has a different opinion on the same,

“Ratings are not in anybody’s control. Even I have done a show (Mad in India on Star Plus), where the ratings didn’t meet expectations. If I was good with that system, I’d be working every day and doing 10 shows.”

On the show completing 100 episodes did it really hurt Sunil Grover to not be a part of it, he said, “It did, but maybe it’s destiny.”

He is very glad that people have loved his characters and enjoyed watching it on the show, be it Mashoor Gulati or Rinku Bhabhi’s fight with Kapil on the show.

It was one of the toughest decision and a risky one to discontinue the show but he has no regrets or grudges, he said,

“Of course, the association had been successful and I think Kapil is extremely talented and I wish him luck.”

Sunil even highlighted that he will love to play these character but the intellectual rights remain with Sony Channel, he said, “I can do these characters on live shows but not for another channel.”

Talking about his big screen, Sunil was in controversy for not promoting the movie Coffe With D, here’s what he had to say,

“How do I promote something I don’t know what is in it. The makers had promised to show me the film, they did not. Kal Kal karte Kalyug aa Gaya.”

Remembering the entire fiasco he said,

“Mujhe graha pooja karani padegi shayad. You learn from experiences like these and move on. I am open to doing more films because I’m not a comedian. It’s very difficult to be one. I am an actor who makes caricatures out of characters.”

Sunil is no longer a part of TKSS but he has appeared in shows like Indian Idol and Sabse Bada Kalakar, he said “The channel has been kind. Mahine mein ek aisa episode ho toh meri EMI (Easy Monthly Installments) nikal jaati hai.”

Sunil Grover also spoke about offers that are coming his way, he reveals,

“There are offers from 10 places but there is no point talking about them till something materializes. Right now, I’m not in the state of mind to lock anything. I need to understand what I’m getting at first.”

Well, we surely feel you Sunil Grover and we wish you all the very best for the future ahead. What do you all feel about Sunil’s opinions? Let us know in the comments section.

Baahubali 2 First Review By A CBFC Member Is Out! He Says The Movie Is AMAZING!
TRPs Of Kapil’s Show Record A Major Fall! Now Only A Miracle Can Save TKSS