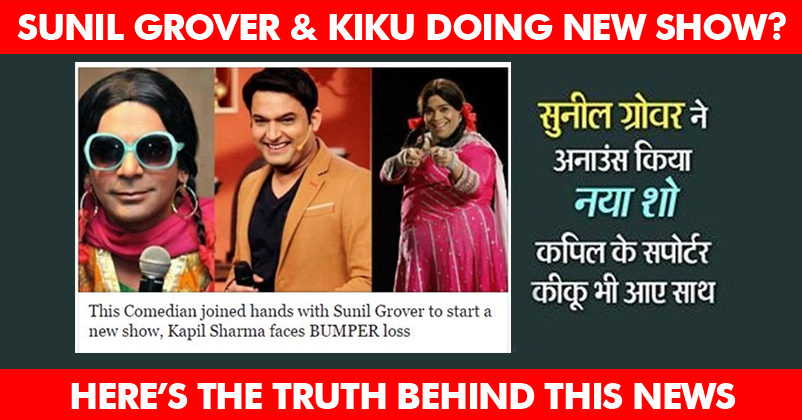 Sensationalization, misleading and negative, that’s the best way we can describe reporting nowadays. The Kapil Sharma- Sunil Grover fight is controversial, so the media jumps in, make it even worse and add their own misleading facts to grab eyeballs.

The recent buzz is that Sunil Grover And Kiku Sharda have joined hands for a new ‘SHOW’ after quitting The Kapil Sharma Show. This is what the media and leading websites are reporting. Well, these headlines and the fake stories of comedians quitting the show is enough of what we had already. In the above screenshot, we can clearly see how the leading websites have reported the news with a misleading headline, almost all websites have followed the same.

We believe our viewers should know the actual truth the way it is. Manipulations everywhere and every time is certainly not acceptable, sometimes even our own website indulge in some clickbait headlines but our intentions are never to cross a certain limit and mislead our readers.

So the truth is that Sunil Grover is all set to perform on stage on April 1st, 2017. This stage show is a one-day affair (stage show lasts for few hours) and joining him on the stage would be Kiku Sharda. For those who are thinking it’s a new show, then it’s not the case. The stage show is called ‘Dr. Mashoor Gulati Comedy Clinic’. The character ‘Dr.Mashoor Gulati’ is a creative property that belongs to K9 Productions and Sony Channel.

Sunil Grover and Kiku Sharda cannot disassociate themselves and perform a stage show just like that. Everything was already scheduled even before the fight. The recent show happened on 18th March in Mohali, which itself proves that the fight has nothing to do with stage performance. Just because of the untimely fight mid-air, all the media are pouncing on the golden opportunity to encash the most out of it. We don’t want to belong to such kind of misleading journalism.

All we want now is that the artist themselves coming forward and clearing the air. A lot of misleading reports are making the situation even worse. What do you guys feel? Let us know in the comments section.

Kapil Sharma’s Rumored Ex-GF Preeti Simoes Deleted Her Twitter Account, Is This The Reason?
Air India To Take Strict Action Against Kapil Sharma For His Unruly Behavior In Flight