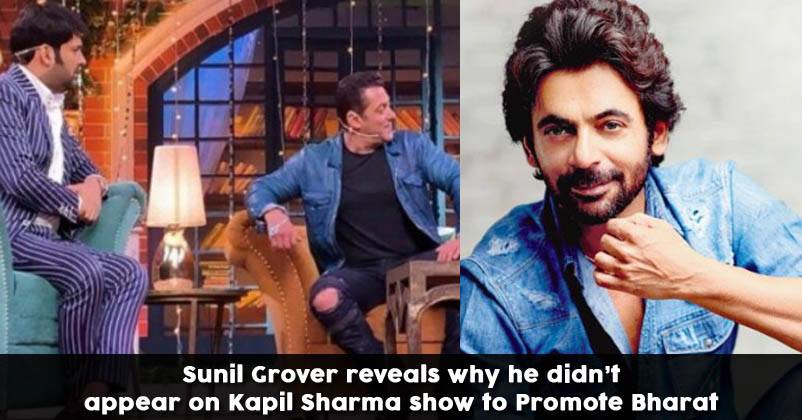 It’s been a long time since Kapil Sharma and Sunil Grover have parted ways. Fans still want to see them together on The Kapil Sharma Show but it seems Sunil has no plans to get back; not even as a guest.

Recently, Salman Khan and Katrina Kaif promoted their upcoming film Bharat on the sets of The Kapil Sharma Show. Sunil Grover plays an important role in the film too, but he was not part of the promotions. When asked about the same, Sunil told Bollywood Hungama that he didn’t feel like going.

Sunil said that it was not necessary for him to go because when Salman and Katrina are there, you don’t need any other element for promotion. He also added that he didn’t feel like going so he avoided it.

When asked if he will ever work with Kapil again, Sunil said that only destiny decides for how much time you should be a part of a particular project.

He said he received a lot of love from people and immense recognition for whatever time he worked in the project and he will always remember that. However, he says that only destiny will decide everything and if it’s written in his destiny he will surely work with Kapil again.

Rohit Shetty Shares A Dangerous Stunt Video From Sooryavanshi Starring Akshay Kumar
Salman Khan Takes A Dig On Katrina Kaif For Doing Breakup with Him, What He Said Will Make You LOL