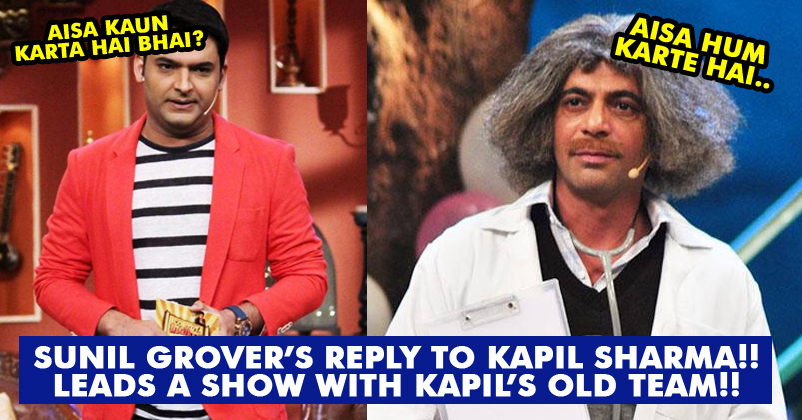 Sunil Grover was flooded with lots of offers after his infamous fight with popular TV comedian and Bollywood actor Kapil Sharma. There were reports about Colors TV approaching Sunil for his own show with them. Even Team AIB during their online show “On Air With AIB” asked Sunil Grover to join their team but the talented comedian didn’t commit to any offer.

“There are offers from 10 places but there is no point talking about them till something materializes. Right now, I’m not in the state of mind to lock anything. I need to understand what I’m getting into first.”

We all know, Sunil Grover has some really crazy fans who always remain curious about his performances; therefore, he keeps entertaining them through stage shows. He also performed at Sony TV’s Indian Idol and Sabse Bade Kalakar. thereby fulfilling his commitments with them.

Now a big news for all Sunil Grover lovers is that he is soon going to lead the former team of The Kapil Sharma show which includes Ali Asgar, Sugandha Mishra, Roshni Chopra & Chandan Prabhakar.

As per the latest update, the Sunil’s team will be doing a live show titled “The Comedy Family” in Ahmedabad on 27th May.

Have a look at the poster of the show which presents Sunil Grover at the centre. Isn’t that amazing? Sunil Grover himself shared the update on his Facebook Page –

This also makes us wonder about possibilities that sooner or later Sunil Grover will have his own TV show. And with both of these comedians competing, it’s the audience who is going to get best from both sides. Exciting times ahead!

4th Day Collections Of Bahubali 2 Are Out! Monday Collections Are UNBELIEVABLE!
Anushka Sharma’s Fan Gatecrashed Her Birthday Party! What The Actress Did Is Heartwarming!