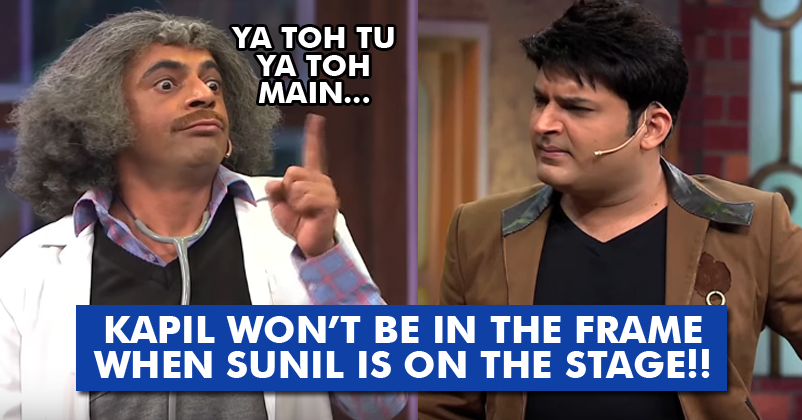 Kapil Sharma and Sunil Grover’s fight is becoming a nightmare for Sony Channel. The channel cannot compromise even one artist from the show as they make a great team.

Without Chandan, Sunil, and Ali, The Kapil Sharma Show is not at all happening and the TRPs are the biggest proof.

Despite efforts, Sunil Grover is not convinced to come back. He has clearly informed the channel about the same.

He was even offered a good amount of money as a compensation for coming back but he did not accept it. He rather took to his twitter and voiced his opinion that money cannot be the sole reason behind working passionately.

The latest report on leading daily states that Sunil has informed the channel that he is firm he will not return to show and if he does then he has a condition.

His condition is that he will have a minimum or no interaction with Kapil Sharma. He conveyed the channel that they can use his talent for other shows as he is bound by the contract with the channel. He told them that he can perform and entertain in other Sony shows just like he did in the grand finale of Indian Idol.

The sources from the leading daily quoted,

“It’s not just Kapil’s show, even the channel has invested in it. Sunil has a contract with the channel and he cannot just leave it. He, on the other hand, has told them he doesn’t want to return to Kapil’s show, but they can utilize him for their other shows.” “However, the channel is still convincing him to return to Kapil’s show now. He has been told that if he comes back his interaction with Kapil will be minimum or not at all (Kapil won’t be in the frame when Sunil will be on stage). In the meantime, they have also told Kapil to mend bridges with Sunil. It’s a prime slot and the show has been popular, though lately, it has suffered a setback due to the Sunil-Kapil fallout.”

The channel has already told Kapil to mend his differences with Sunil as soon as possible since they cannot afford such a big loss.

The channel has banned cell phones and cameras on the sets of the show to avoid any pictures being leaked online.

However we don’t completely believe the media reports on the issue but the mentioned clause by Sunil is something that is unattainable. We wonder what they will do to get Sunil back.

Continue Reading
You may also like...
Related Topics:Sunil Grover Will Return To The Kapil Sharma Show Only On This One Condition