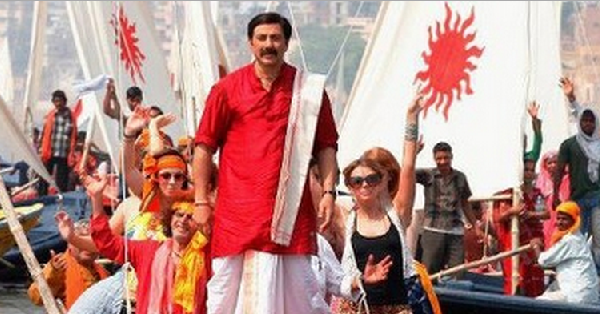 Mohalla Assi has always been in controversy on account of its trailer where we can hear abusive language being used in every second sentence. The latest update in this connection is that Bollywood actor Sunny Deol is facing trouble due to this movie. An FIR is lodged against him as well as Chandra Prakash Dwivedi, director of the movie, with Varanasi police, alleging that they hurt religious emotions.

It is reported that a company known as Sarvajan Jagruti Sanstha has made this complaint. According to its members, the movie violates moral values as well as demonstrates the city of Varanasi in bad light.

On Sunday, this FIR was lodged with Bhelupur police and as per the accuser, “The film hurts religious sentiments and we cannot allow such a film to be released.”

If you have seen the trailer, you must know that Sakshi Tanwar and Ravi Kishen are also among major characters in Mohalla Assi. The movie is based on famous novelist Kashi Nath Singh’s creation titled as “Kashi Ka Assi” which revolves around a family’s life which belongs to middle class and organizes religious ceremonies for earning the livelihood. The lead role is portrayed by Sunny who uses bad language in day-to-day conversation. The role of his wife is played by Sakshi who’s shown to be not getting the reason of foreigners being very interested in the city.

Previously, Chandra Prakash Dwivedi claimed that the trailer of Mohalla Assi had been leaked. Not only this, as per the director, it was someone’s conspiracy for maligning this movie, the novelist as well as the star cast.

To quote what Chandra Prakash has to say regarding the issue, “There are a few things I want to clarify — this is not the official trailer, it’s a leaked version for which we have lodged an FIR in Oshiwara (Mumbai Police) and Cyber Cell. It’s a conspiracy to malign us and the film. The version has been made in such a way that it shows as if the film is all about abuses and maligns the image of the holy city. That is not true. This is not what our film is all about.”

What is your opinion in this matter? Is it really a part of the conspiracy or a planned scheme of somebody who wants to create problems for the movie? Or is it just a statement of the director which does not have anything to do with reality or is it a publicity stunt? Share your views with regard to the news in the comments section below!

UP Hindus Will Observe Fast Of RAMADAN With Muslim Neighbors; Perfect Example Of Religious Harmony
These 2 Examples Of True Secularism Prove That Humanity Is Superior To Religion