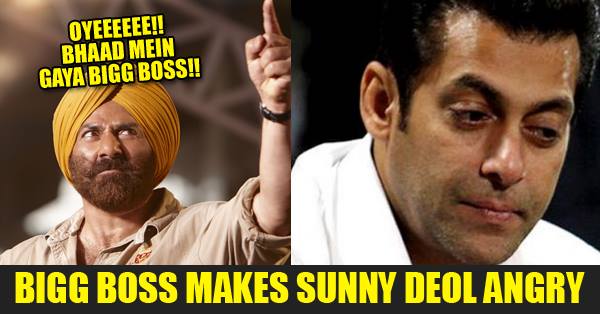 True, Bigg Boss 9 is an amazing platform for actors to promote their upcoming films and for the same, we can see celebs appearing on the reality show to grab the attention of more and more audience towards their movies.

Last week, Dilwale cast Shah Rukh Khan and Kajol graced the stage and after them, it was Bollywood actor Sunny Deol to attract viewers for his upcoming action drama movie Ghayal Once Again. Sunny’s movie is scheduled to release on 15th January 2016 and to promote it, he appeared on Bigg Boss; however, all went wrong and unexpected for him.

The reality show makers delayed the shooting for so long that it made Sunny Deol upset as well as angry and he walked out of Bigg Boss without shoot. Sunny Deol also met Salman Khan and they had fun, doing some chitchat and entertainment; but things went wrong later and Deol got quite infuriated on account of extreme delay on the part of creative team.

He waited for hours till night and when things didn’t work, he just left the show without shooting episode for promoting Ghayal Once Again. What do you think? Should Sunny Deol have patience to maintain nice relations with people as he doesn’t have many movies or was he entirely correct? Share your views in the comments section below.