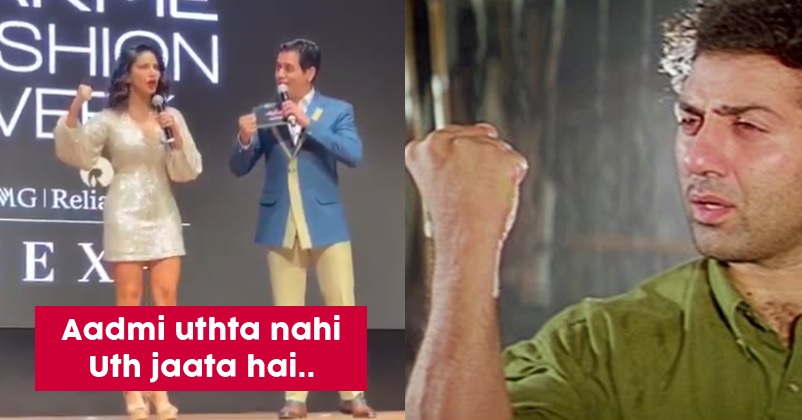 Sunny Deol, the action hero, has given some mind-blowing performances including the one that he gave in “Damini” in which he portrayed the character of a drunkard lawyer. In the movie, he said a dialogue, “Yeh dhai kilo ka haath jab kisi par padta hai toh aadmi uthta nahi, uth jaata hai”. Sunny Deol may have entered into politics but this dialogue is still loved by his fans. 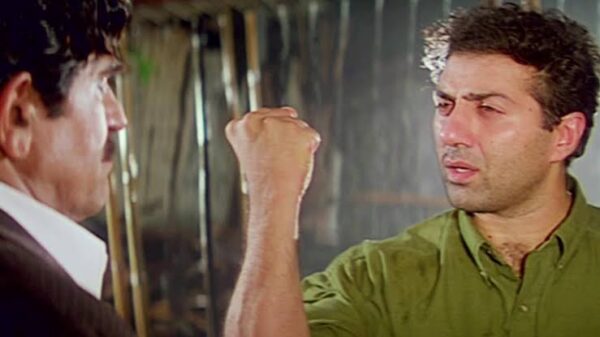 While Sunny Deol is known for his action performances, Sunny Leone, the beautiful actress, is known for her hot performances. She is one of those actresses who have a good sense of humour and don’t mind making people laugh at their own expense.

As she has spent the majority of her life outside India, her Hindi is not up to the mark and obviously she has a foreign accent. During an event, she displayed her sportsmanship by reciting the Dhai Kilo ka haath… dialogue of Sunny Deol which resulted in making public laugh whole-heartedly.

The gorgeous actress was dressed in a silver-coloured outfit and her curly hair made her look awesome, here is the video:

Sunny Leone is slowly making her mark in Bollywood after achieving a lot of success in adult industry and besides being an actress, she is also a businesswoman and owns a cosmetic and beauty products line. What’s more, she has also worked as the host of Roadies and Splitsvilla.

How did you find her dialogue delivery? Amusing, isn’t it?

Shah Rukh Opens Up On His Mistakes Which Resulted In Flop Movies
Google Most Searched Indian Movies 2019 List Out. Shahid Kapoor’s Movie Is At The Top