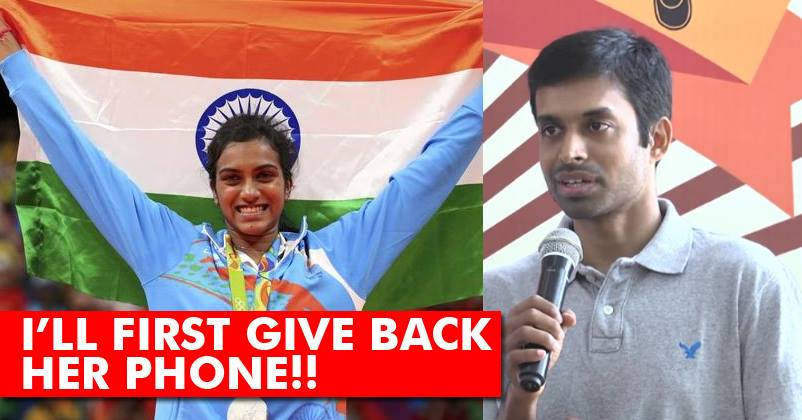 PV Sindhu, the badminton champion has made India proud with her silver medal win in Rio Olympics. This win was possible as she put in lot in lot of efforts and practiced like crazy under the guidance of her strict coach Pullela Gopichand. Yes, her coach is very strict and has taught Sindhu the ‘Hard Way’ right from the time she joined his academy. Be it Sindhu or be it Saina Nehwal, Gopi follows the same theory with everyone and makes them sacrifice some small pleasures. Wondering what does he do? Well, he doesn’t allow them their phone and nor does he allow them to eat sweet curd or ice-creams. These are very small things, but for youngsters of Sindhu’s age, these things matter a lot.

However, after Sindhu’s epic win at Rio Olympics, Gopichand is ready to compromise on his strict terms. Now, he has allowed Sindhu to use her phone, Whatsapp her friends and moreover enjoy her favorite pick of ice-cream. Gopichand, who is super- excited, says

“Sindhu did not have her phone during the last three months. The first thing is I would return her phone. The second thing, after coming here for last 12-13 days, I had deprived her from having sweet curd which she likes most. I also stopped her from eating ice-cream. Now she can eat whatever she wants”

“She has had a great last week. The kind of work she has put in in the last two months is tremendous. The kind of sacrifices she has made without complaining is fantastic. She deserved to enjoy the moment and that’s what I really wanted her to do. I’m very truly very happy.”

At the age of 21, Sindhu has so many restrictions, but still she didn’t complain about any and continued her journey. Expressing his happiness over Sindhu’s performance, Gopi says

“Sindhu is much younger. I think she has developed a lot in this tournament. She has a lot of potential to grow further. You should give your best shot. She has done us proud. I’m really happy for her.” The coach’s only advice to his student is to enjoy her silver medal rather than being disappointed about failure to win the gold medal. He says

“I told her don’t think that you lost it. Remember that we have won a medal. I wanted to tell her this to ensure that she does not forget the last week’s effort that she put in to come to second place on the podium.”

Gopi’s only wish was that the National Anthem should have been played at the stadium. He says

“I just wish that our flag had gone one bit higher and our national anthem was played. But having said that, hats off to Sindhu for the kind of effort she’s put in,”

So guys, what do you feel? Do let us know your thoughts in our comments section below.