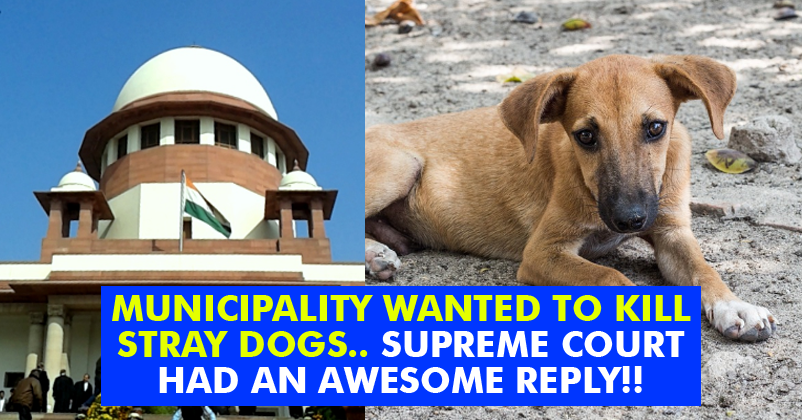 Often, we come across people who just hate dogs and cause harm to them for no reason. Time and again they look for a chance to throw stones at them and irritate them with stupid acts. But amidst all this, people tend to forget that even these creatures have a right to live. This is exactly what the Supreme Court made everyone realize, in its response to a petition filed for killing nuisance-causing stray dogs. The court was hearing petitions filed by People for Elimination of Stray Animals, who wanted killing of dogs who caused nuisance. On the other side were animal’s right activists, who wished to protect them. The petition was filed based on Mumbai Municipal Corporation Act; according to this, if dogs create nuisance to the public, the court can seize and kill them.

People are aware of the Mumbai Municipal Corporation act but aren’t aware of the Prevention of Cruelty to Animals Act of 1960, as per which which only mortally wounded, terminally ill or rabid dogs can be killed. In this Act, there’s no provision for killing dogs that cause nuisance.

The complaint stated that these stray dogs must be destroyed as they created nuisance, but interestingly the SC had a different take on this. After hearing out both the parties, SC passed the verdict that “Street dogs have a right to live” and can’t be killed under any circumstances.

A bench of Justices Prafulla C Pant and Dipak Misra stated that they will investigate this issue and will refer the welfare laws for knowing the exact definition of “Nuisance” according to them. Anand Grover, the Senior Advocate (Animal Welfare Board) stated that the term “Nuisance” is very subjective and just because a particular person thinks it is nuisance, it can’t be accepted universally.

“When a dog barks, for some people it is a nuisance. There is another angle to this. Most dogs behave in such a way because they are troubled by people throwing stones at it or when it is subjected to some sort of pain. The municipality cannot just seize these dogs and put them to sleep permanently.”

However, SC took the right decision by protecting innocent animals. This is indeed a great news for all animal lovers, isn’t it? What are your thoughts on this?