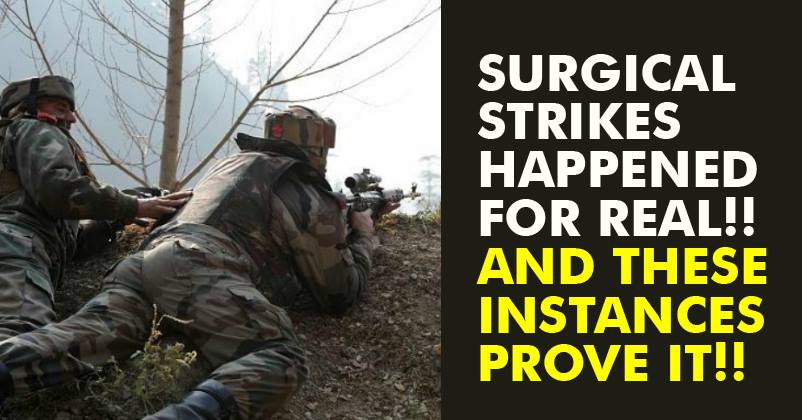 However, it feels a deep pain to actually prove the occurrence of surgical strike. The pain is not about proving it to Pakistan or some other country but to the fellow brother and sisters of our own country. The Indian Army reportedly has handed over the video of the surgical strikes to Prime Minister’s Office (PMO) and now it’s upto the establishment of the country to release the video.

Well, that being said, here are some points which will prove or somewhat will satisfy some people who are asking for the proofs of the surgical strike. Ghulam Akbar, SP, Mirpur has confirmed that surgical strikes did happen on the impending night of September 28-29. He also confirmed that trucks were brought in to take away the bodies of the slain terrorists.

Even though the Pakistani Army and its government are denying any surgical strike, the locals living across the LoC has confirmed that there were indeed heavy firing along with big explosions. Mirpur SP has also confirmed that, out of those dead terrorists, five dead bodies were of Pakistani Soldiers. This proves that surgical strikes have taken place, since Indian Army didn’t attack on any post of Pakistan army. Instead it hit the launch pads of the terrorists which were possibly protected by those slain Pakistan soldiers.

American Think Tank RAND has also confirmed the Indian Surgical Strikes and have quoted them as ‘Carefully measured’ strikes. Rick Rossow from the Center for Strategic and International Studies (CSIS) recalled that the idea of such precised strikes was given last year, when the Indian Army initiated an attack against terrorists in Myanmar.

Well, I am sure that many people with predetermined narrow mindsets will still not believe in it. What are your views about these proofs, share your opinion in the comment section below.

This Conversation Of PM Modi & Virat Kohli On ‘Clean India’ Is Inspiring & You’ll Love It!
Revealed! 5 Psychological Tricks To Make Anyone Do What You Want…