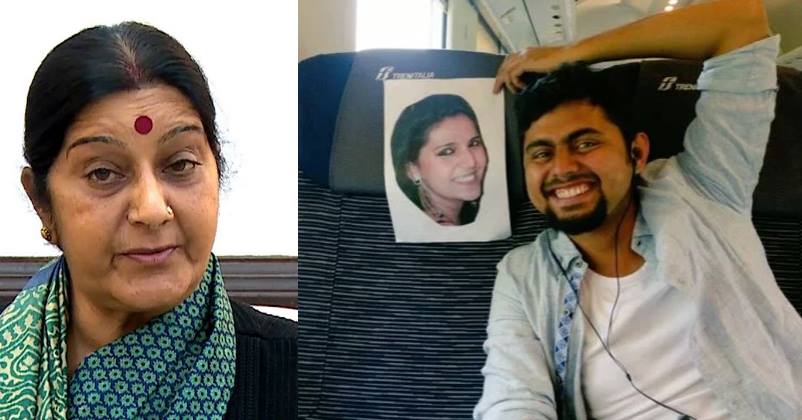 Sushma Swaraj is, no doubt, one of the most efficient ministers at present and always makes headlines for her good deeds. Once again, she has done something which proves that not only she’s a good leader but also a great human being who always helps the needy, no matter whether he’s her hater or troller.

If we leave the example of Queen’s Kangana Ranaut, each and every person on this Earth wishes to enjoy honeymoon with partner but you’ll be shocked to know about this man named Faizan Patel who made up his mind to go on his honeymoon to Europe alone, leaving his wife Sana in India after her passport was lost. Well, it won’t be wrong to say that many might have called off their honeymoon after this unfortunate happening but what he did was not usual at all!

Interestingly enough, he took a photo of himself sitting on a plane while photograph of Sana was stuck on the seat which was booked for her. He tweeted this photo to External Affairs Minister Sushma Swaraj and asked for assistance. Our minister is so helpful that she replied without further ado, assuring the man that Sana will accompany him.

At this point, it’s worth mentioning that he’s the same man who tried to troll PM Narendra Modi and EAM Sushma Swaraj once. The NDTV sales manager couple has been abusing Indian PM as well as Sushma for long but both are at her mercy presently for going on their honeymoon together! This man used to abuse the minister and cracked s*xist jokes on her. However, when this man needed help, Sushma was ever ready!

She provided all the assistance required for his wife to get a duplicate passport without thinking a minute about all the dirty remarks and hatred he had in his mind for her. Here’s how the series of tweets took place:

This is how I am travelling with my wife as of now. @SushmaSwaraj @MEAIndia @MEAQuery pic.twitter.com/igeSwcfWkZ

And she ensured him of assistance:

She’s true to her words!

Thanks to @SushmaSwaraj, the passport is almost issued. Now the problem is the next available date at the VFS is on Thursday.

Minister par excellence @SushmaSwarajBJP I am glad we have you. You're a beacon of hope.

My wife Sana has received her passport. However she is not able to get an appointment at the VFS Delhi office.

Hats Off To Sushma Swaraj!