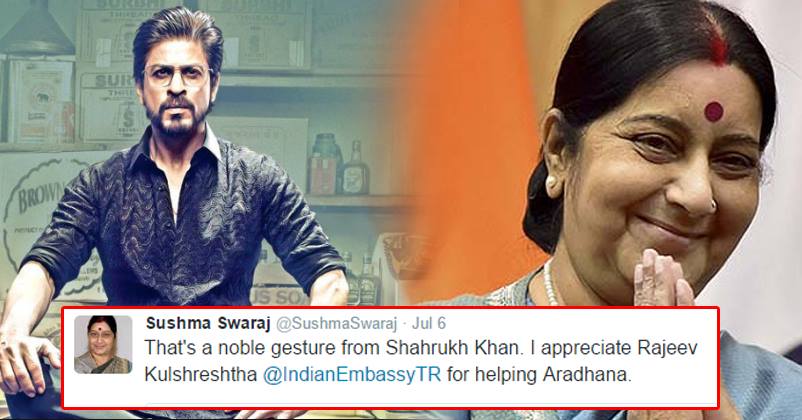 Sushma Swaraj has always been popular for helping generously as soon as she receives a tweet from someone who is desperate. Yes, this time she has mistaken an identity. Well, she mistook another person with the name ‘Shahrukh’ as being our beloved King Khan from Bollywood, Shah Rukh Khan! But she was wrong; it was some common man sharing the same name ‘Shahrukh’. Aradhana Baruah the 21 year old Assamese girl who studied medicine at Ivano Frankivsk National Medical University of Ukraine, had taken a British Airways flight back to her home Guwahati for her holidays. She was landed at the Ataturk Airport in Istanbul on the 4th of July. Unfortunately, a terrible suicide attack took place there and almost 45 people were killed. Many people were injured too. Well, at Istanbul, Aradhana was going to change her flight. Usually, transit visa doesn’t come as a hurdle, but this time it did owing to enhanced security. Now, this poor girl was detained in the room for hours since she didn’t have a valid visa. Now, they sought help from Sushma Swaraj with regards to this!

Aradhana’s mother says “That was when we tweeted to Sushma Swaraj madam for help who promptly responded and ensured that my daughter flew back safely to Mumbai via Dubai with the help of Indian embassy officials in Turkey,”

Now, Aradhana had a family friend in Mumbai by the name Shahrukh who ensured that the girl gets adequate rest at their home before she boards her next flight to Guwahati. Now, the ‘same-name’ thing confused everyone including Sushma madam.

Rajeev Kulshreshtha – Why is she detained at Instanbul airport ? Pl help this girl. @IndianEmbassyTR @CGI_Istanbul https://t.co/7KjkZdeBfp

Alternate travel arrangements are made!

Aaradhana left Istanbul for India via Dubai. Alternate travel arrngmts made for her in consult with family1/2 @SushmaSwaraj @IndianEmbassyTR

She had a visa problem!

Aaradhana had a visa problem. We will try to resolve baggage problem tomorrow. 2/2 @SushmaSwaraj @IndianEmbassyTR @pichkumoloy

Thank you for the most efficient foreign service we have now under madam . Dist collector Hkd

Madam I salute you . This level of effectiveness in Govt may be best in the world . Regards DC

Even Sushma misunderstands and thanks King Khan!

Earlier, she had tweeted “That’s a noble gesture from Shahrukh Khan,” must not have failed to confound the film star.” But later as the girl’s family cleared all the misunderstanding, she corrected it!

Yes, as soon as the name SRK came, the media started reporting all this. This mistake was corrected once the family of the girl was called. In the end, the Aradhana’s mom said ” Alls well that ends well”.

Here’s What Pen Eraser Is Actually Meant For.!!
Salman Khan Made His Co-Star Amit Sadh Very Happy By Gifting Him Something Special