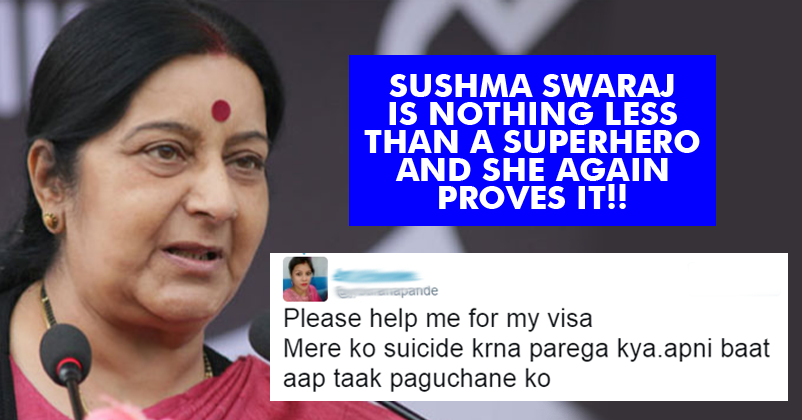 India’s Minister of External Affairs, Sushma Swaraj is one woman who never disappoints her followers, especially the ones on Twitter.

She has played her Twitter game really well. She uses the social media to solve and address people’s issue.

Saving failed marriages or Visa issues or bringing home a stranded son, she’s done it all in time.

The Iron lady as we call her, rightly proves her mettle every time. The minister has gone out of her way to help people and this time she saved someone from committing suicide.

Well, it all started with another woman reporting her problem to Sushma Swaraj.

To which Sushma replied…

Then another Twitter Jyoti Pandey threatened to commit suicide!

Sushma Swaraj noticed the tweet and replied her immediately:

The lady in trouble, seemed to be denied her visa to New Zealand where her husband resides:

The Minister asked her for details

She kept telling her problems…

On learning her problem, she asked her for all contact details

Things looked much better for the woman now

What more, one can ask for? Well, Sushma Swaraj is surely one motivation in every responsible person’s life. We literally mean it. Anyone in power could have taken this tweet in a light manner but with Sushma Swaraj, that’s not the case. The Iron Lady is indeed an angel in disguise for many.

Well, as we said ‘Angel’ in disguise. She should be called a superwoman actually, what say people?