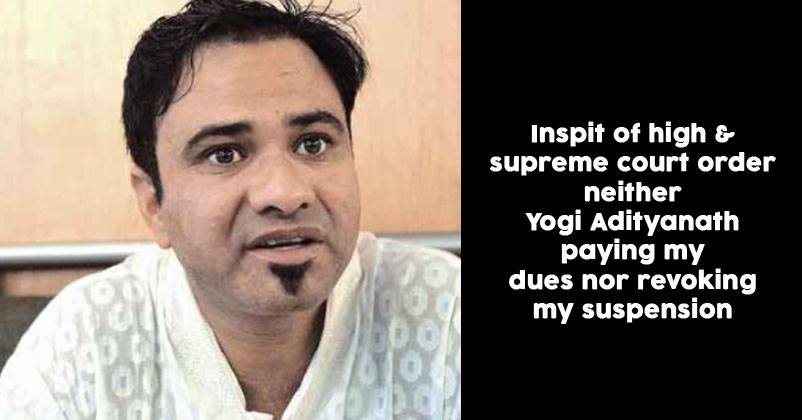 Suspended Gorakhpur doctor of Baba Raghav Das (BRD) Medical College, Kafeel Khan has accused Uttar Pradesh government of not clearing his dues. Khan was suspended from his duty after the death of 60 infants at the Medical College in Gorakhpur, in August 2017.

He requested the Indian Medical Association (IMA) to issue a statement for him also. The IMA is protesting against the violence that junior doctors are facing in West Bengal.

“I am also from your fraternity. I also have a family to feed,” he added in the tweet.

In his tweet, Khan also attached a copy of the letter written to Ashutosh Tandon, UP’s Health Minister. In the letter, he has requested him to pay his suspension allowance.

Dear @IMAIndiaOrg
I have been running from pillar to post for over 2 yrs now
Inspit of high & supreme court order neither @myogiadityanath paying my dues nor revoking my suspension
Plz issue a statement for me too.
I am also from your fraternity. I also have a family to feed🙏 pic.twitter.com/A217RtyAhK

Allahabad High Court had earlier granted him bail due to lack of evidence against him.

Regarding his suspension and allowance, the Supreme Court denied interfering in the matter but ordered him payment according to the law.

Fathers’ Day Special: 10 Ways To Show Your Dad That He Is The Real Hero
Major Train Accident Averted On Mumbai-Pune Route Due To CCTV Cameras