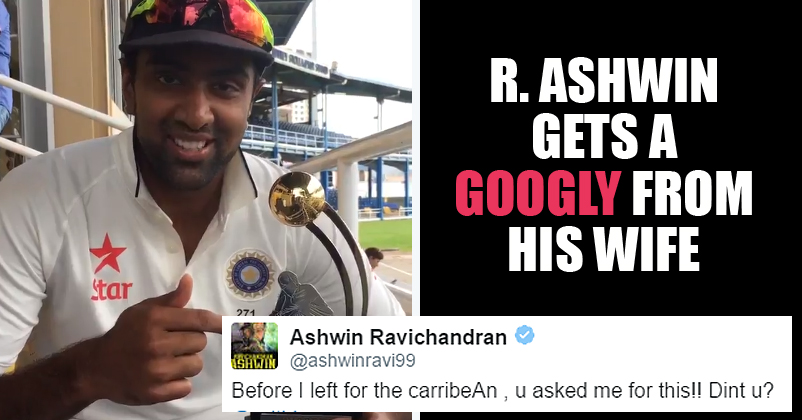 Okay, so the movie RUSTOM is a hit and it is better for many people to not to mix reel life into real life. Many people have now developed a perception about women who are staying alone by tagging them as ‘Vulnerable’ as they are not ‘PROTECTED’ by their husbands anymore while they are away.

2 Things – First one – Women are not vulnerable to anything other than shopping ( Stereotype Intended), second one – They are good enough to protect themselves.

Both of my points can be justified by bringing this sweet little twitter conversation between Indian Cricketer R.Ashwin and his wife Prithi Ashwin.

R.Ashwin is currently at the top of his game where he just had a successful campaign in West Indies. He was declared as man of the series for his all round performance. And this is the sixth time that he was given the Man Of the Series Award, which is in itself a record breaking achievement as no other player in Indian Cricket has managed to get that. This Record was previously shared by Virender Sehwag and Sachin Tendulkar. Now there is a saying which goes like ‘Behind Every Successful Man, There Is A Woman’. And yes, that woman can be anyone. She can be either your mother, wife, girlfriend, sister or your teacher. In R.Ashwin’s case, it was his Wife, and hence after the award ceremony, he dedicated his award to his wife through this twitter video which revealed that it was something that she had asked for, before he left for the tour.

Before I left for the carribeAn , u asked me for this!! Dint u?@prithinarayanan pic.twitter.com/c1cRvEs6CN

It was very sweet of him to dedicate his award to his wife, but it was her reaction that made the conversation so charming. There is nothing like shopping that can cheer up a woman. DAMN RIGHT Oniochalasia ! !

Something that every wife wish for. Shopping and her husband. Oh wait, shopping with her husband. And after this, she also tweeted:-

Well, whatever that was, that heart was sweet ( just being honest for not knowing what it meant)

And after this tweet, Twitteratis took this conversation as serious relationship goals which is indeed healthy. Dedicating your achievements to someone close to you does brings out how happy you are with them.

Oh sooo cute!!! @prithinarayanan thanks for asking for this!❤

These Two Athletes Are Awarded For The Best Sportsmanship Spirit In Olympics 2016
MS Dhoni’s Biopic Is In Controversy Even Before Release. Here’s What Happened!