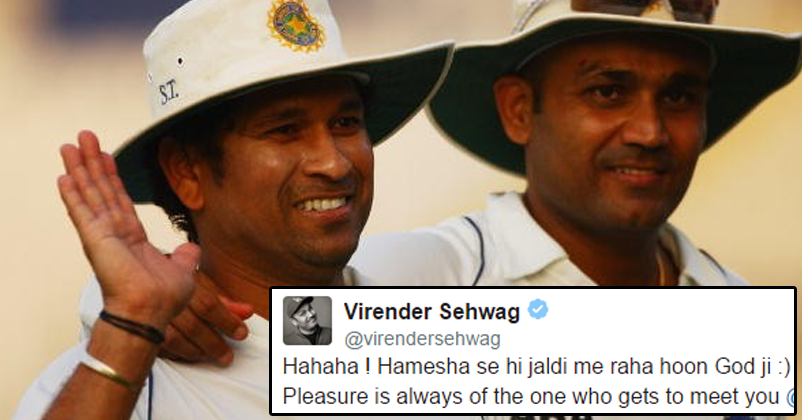 Whenever there will be a discussion on the topic of opening batsman pair of cricket, it is impossible to miss the two great names of Indian cricket, i.e., Sachin Tendulkar and Virender Sehwag. They both have literally ruled the cricket arena and statistics also favor them in this matter. They have opened in 93 innings, scored 3919 runs with an average of 42.13 along with 18 fifty partnerships and 12 partnerships of hundreds.

Sachin and Virender complemented each other perfectly; Viru used to ease the pressure on Sachin with his blasting shots and let him take the role of a sheet anchor. It was always a treat for the fans of both the cricketers to see them batting together; however presently, it is very rare that we see them with each other. But the good thing is that we still get to see them batting on the pitch of Twitter nowadays.

Just recently, they were together in Delhi and Viru shared a photo of him with the master blaster and told his followers about the “darshan” of his God. The Little Champion was also quick to respond to the Sultan of Multan with another pic, a better one! He wrote, “Arre @virendersehwag, thodi der ruk jata to yeh photo use karleta 🙂 always a joy to meet you!”

To which Viru replied, “Hahaha ! Hamesha se hi jaldi me raha hoon God ji 🙂 Pleasure is always of the one who gets to meet you”

Hahaha ! Hamesha se hi jaldi me raha hoon God ji 🙂
Pleasure is always of the one who gets to meet you @sachin_rt . https://t.co/wPZcvFdvTg

Their fans also enjoyed the conversation and expressed their views!

Two legends in one frame!

and my pleasure is just see u both in single pic.

haha two former INDIAN opener having such nice conversat. I COULD EVEN IMAGINE YOUR TALKS IN THE MIDDLE NOW 😂😂

The most powerful opening pair in the history of cricket!

Most powerful opening pair in the history of cricket. Miss you both's brilliancy.

Yes, we all do have!

we all have dream to meet you once in life @sachin_rt 😘😘

Viru is so down to Earth!

one thing I always feel, @virendersehwag is also a very big star. But he shown 2 any1. Alws down 2 earth. Dis is y we lv u a lot

Wish it could have happened….

nice to see you together both of you ..after so long…kash wapas ground me is jodi ko dekh pate 😐

We miss the two legends!

Isn’t it just amazing to see that the two legends of cricket are so humble and polite?

Kohli’s Mouth-Shutting Reply On Journo’s Question About His Form As An Opener Is Mind-Blowing
11 Cricketers Who Played For 2 Different Countries! There’s One Who Played For India And Pakistan Too!