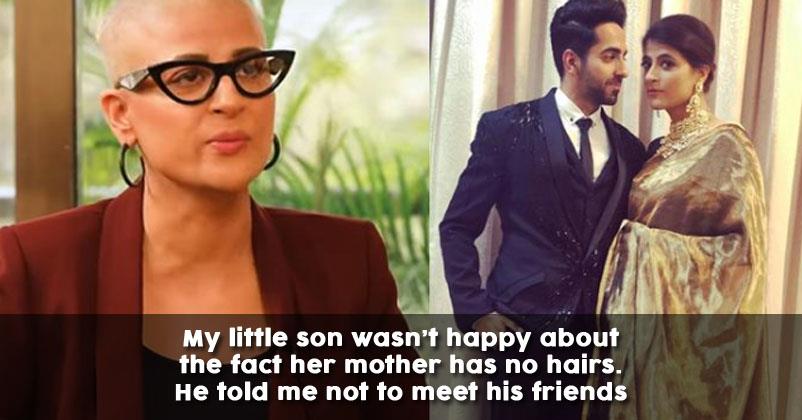 Ayushmann Khurrana’s wife Tahira Kashyap became an inspiration for the nation for setting up a searing battle against Cancer. Tahira and his family was ready to fight cancer and never lost hope.


In September 2018 Tahira took to her Instagram account to break the news to her fans that she underwent mastectomy procedure as she was diagnosed with stage 1 breast cancer. That created a stir on the Internet.


After Tahira’s cancer treatment she had to shave her hair which was a big dilemma for the writer. Recently in an interview, Tahira revealed her son was embarrassed when the actress went bald.

Tahira said she was aware of the fact that she is going to lose her hair after the chemotherapy but deep down the line she wasn’t ready to go bald. As on situations like these, you don’t really know how should you react to it. I kept a wig and several scrafs of different colours ready once I started going for the chemotherapy as I wasn’t ready to go bald.


Tahira further added, I never imagined myself in short hair. I came from a school where beauty meant long hairs well that was old me.

One day when the extensions couldn’t hold on the small strands of hair. So I decided to shave it off. I was happy about the decision but my little son wasn’t happy about the fact her mother has no hairs, Tahira added.

Tahira said her seven-year-old son asked her ‘I have seen men going bald not women, why did it happen to my mother’. Virajveer even told his mother not to meet his friends and Tahira did the exact opposite.

Tahira said ‘She met his friends and after meeting for 15- 20 mins, they realised everything is alright. That day I redefined beauty for them.’

Tahira is an inspiration for all the women who are afraid of losing hair.