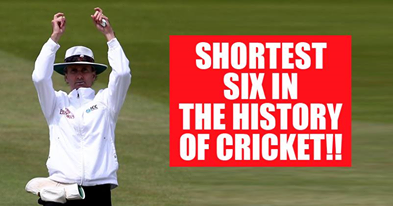 You would have watched many batsmen hitting sixes which lands out of the stadium probably hitting cars in parking lot. Also, there have been many competitions where a player gets an handsome reward for hitting the biggest six of the match. But no one considers or remembers anyone who hits the smallest six of the match.

But here is a different story where a batsman scored SIX runs just by sweeping with minimal effort and it happened during an ODI match between Pakistan and Sri Lanka where just a flick of wrist fetched Pakistani batsman SIX runs. To be mentioned, this was the first SIX of the match as analysed by the commentators.

Share your thoughts about the video and this amazing SIX in the comments section below.

Continue Reading
You may also like...
Related Topics:Take A Look At The Smallest SIX In The History Of Cricket

Watch Video ! AB De Villiers Wants To Have A Word With PM Modi Regarding Indian Citizenship!
Virat Kohli Discloses Name Of The Bowler He Fears The Most