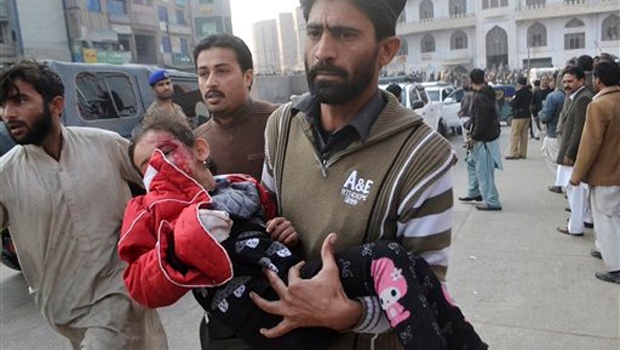 Shame, shame and shame on Taliban. Let’s just forget what religion we belong to and let’s read the whole article for the sake of humanity. Today, you may have heard about the shameful incident in Peshawar, Pakistan where a group of Taliban attacked an army-run school. They killed more than 126 people and more than 120 people are injured. More than 100 of the 126 dead people are children (school – students).

According to one rescued student, the suicide attackers wore salwar-kameez and had long beards.

The members of the gang entered the school on Warsak Road by wearing paramilitary Frontier Corps and started firing around 10:30 am(local time). They are still in the school and reports say that they are using students as armors.

A military source said to NBCNEWS, “”They burnt a teacher in front of the students in a classroom. They literally set the teacher on fire with gasoline and made the kids watch.” Three explosions were heard inside the army-school. The situation was totally out of control outside the school with hundreds and hundreds military forces fighting, parents crying over the dead body of their children and the constant sound of firing from inside the school.

Taliban spokesman Muhammad Umar Khorasani said, “We selected the army’s school for the attack because the government is targeting our families and females, we want them to feel the pain.” Indian PM, Narendra Modi and the Nobel Peace prize winners, Malala Yousafzai and Kailash Satyarthi both shared their feelings on this shameful act with Malala describing this attack as “atrocious and cowardly” and Kailash Satyarthi saying “”These are all our children who’ve been murdered today. My heart bleeds for bereaved families. One of the darkest days of humanity.” And many more including the Afghan President, the US ambassador to Pakistan etc expressed their sorrows for this incident.

What are your views on this shameful act by Taliban?