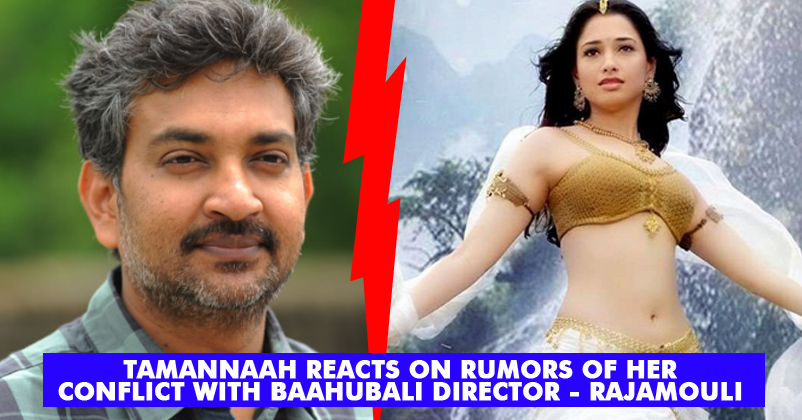 Baahubali 2 makers are busy soaking in the success of the film; we all knew that the movie will enjoy a good response, but we never knew that it will surpass all expectations in terms of collections. Everyone is busy praising SS Rajamouli for giving an amazing cinematic experience, but at the same time, some negative reports have also popped up.

Media has reported that Tamannaah Bhatia, who has played the role of Avantika in the film is upset with Rajamouli because he chopped off her scenes due to unsatisfactory visual effects. As soon as reports about her tiff with the director surfaced online, many people were convinced because of the way the news was reported. In Baahubali: The Beginning, Tamannaah had got a good number of scenes, but in the 2nd installment, the scenes were restricted to just 2 or 3 and that too without any dialogue.

It became a hot topic of discussion on social media and people actually came up with memes and jokes which reflected Tamannaah’s anger. However, when the actress came to know about this, she slammed all those people who spread these baseless rumors.

“This is imagination of somebody who is very jobless. I am and will always be thankful to Rajamouli sir for casting me as Avantika. This news is baseless and I am very happy that I worked in this film. “

“I always knew what my role was. I have great respect for Rajamouli Sir and I am proud to be part of such a cult film. This film has changed my life as an actor and has absolutely raised the bar for everyone in the film industry .”

After she gave a mouth-shutting reply, even KV Vijayendra Prasad, the writer of the film explained the actual reason; he said “Baahubali – The Conclusion happened in the flash back where she can’t be there so there is no scope for her to be included in second.” Tamannaah was actually pissed off with meaningless gossips, which is why she decided to tackle the situation herself with a harsh answer. We seriously don’t know why people don’t verify things before trolling celebrities.

What do you have to say about this? Share your views in our comments section below.

Police Arrested This Guy From Iran Who Looks Ditto Like Lionel Messi! Reason Is Surprising
Finally Gautam Gambhir Reacts On Not Being Selected In The Team! His Response Proves His Class!